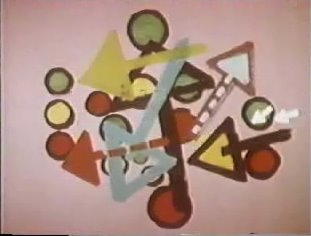 This animation says Sunday morning to me. It's called Hailstones & Halibut Bones from NBC's "Exploring" series from 1966. The narrator sounds like Miss Ellie from Dallas--but i don't think it is. It's all about colors and the artwork in it is great. It was made by Fine Arts Films which was founded by award-winning animator John D. Wilson in 1955. I found the link through Cartoon Modern, a great site if you're into mid-century animation.

Click here to go to the page on Fine Arts Films site where you can watch the animation. Just click on the still of the boy with an olive in his mouth.
shared by John at 5:25 AM

In the Halibut and and Hail thing I thought I was watching some weird version of "The Ring". I became very unnerved halfway through. Couldnt finish it.

I learned alot from the princess piece. Like sweet and sour pork is not a bad thing, just different.

Death by technicolor? You missed "Black"...the color of night! Hmmm, maybe i am condemned to an untimely death.