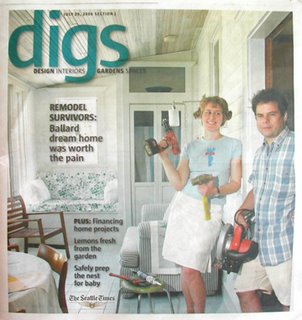 When my friend Jenny and I drove across the country back in 1996, I hopped out in Salt Lake City, she continued on to Seattle where she has more-or-less remained since. You learn a lot about a person when you drive across the country with them. I learned that Jenny has great resolve and humour in the face of potential disaster. Case in point: the night in Kansas when we had to abandon our campsite to seek shelter in the men's toilet of a campground to escape the threat of a tornado. Jenny had the wits about her to ask the older couple in the stall next to us to take our picture to commemorate the sheer ridiculousness of our predicament. So i shouldn't be surprised that she was able to withstand the grueling strain of a 6 year remodel on the Seattle home she shares with her beau, Rob. And i am pleased to see that the Seattle Times also recognized this amazing feat by doing a story on them for their home and garden insert called Digs. I just love the pic of her on the cover holding the drill. The article paints a very good picture of the pitfalls and landmines they had to face. I'm so proud of her. Also, there is a good side bar on how to tackle a remodel without trashing a relationship.
shared by John at 6:00 AM

The best way to keep your relationship intact while remodeling or redecorating your home is to just let Robert do everything and try to stay out of his way.

I learned a lot about him on our cross-country move last summer. Mainly that he's not as good at driving as I am.

Dear anonymous,
sounds as if you are having a bit of a power struggle within your own home situation. Shorten that skirt and shave those sideburns. Demand and get what you want. Dont be a wimper. Who cares what the place looks like if mammas not satisfied, you know what I mean?

Wow I must have been Reeeally wasted because i dont remember posting that first comment. Tequlia makes my clothes fall off.

{Note to self: Never give Parnell tequila}

This fabulous blog has inspired me to start my own. You can visit me at www.ihatebrent.com