We realized it's been a few weeks since we have done a Kekoa update so here it is.
He usually shows up early mornings and now waits for us to get up instead of pecking at the door. The not so little guy has shown up off and on over the last few weeks and still demands his mac nuts by tapping on the door once he realizes we are awake. He spends several hours a day sleeping on the lanai then heads off to feast in the yard. Around 5:30 he heads off up the hill where he sits a few moments before taking flight into the thick underbrush for the night. I am still waiting to capture that flight on film... I sit and wait for it to happen and the minute I blink he takes off.

Last week he completely disappeared for 4 days. He just feels comfortable here on the lanai as this is where he was raised. I am glad to see him becoming more independent though. 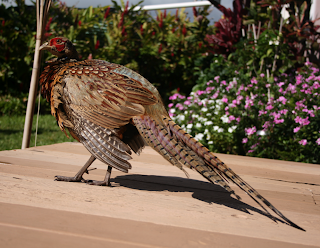 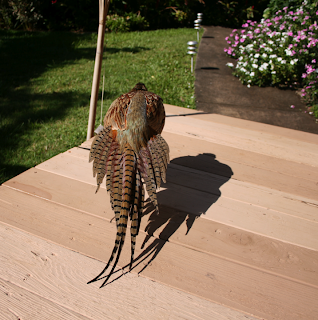 Here is at about half his full size. I would say he is about 12" tall and 18" long and the colors are intensifying everyday. The transformation is amazing. He still loves fanning out and sunning himself in the afternoons.

He has also started puffing up the red areas on his face at various times of the day... I'm still trying to research this behavior. It's pretty amazing... as you can see here, his jowls as I call them hang down and the space between his eyes closes up. It's almost like he has put on a mask. 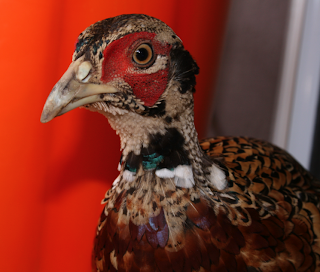 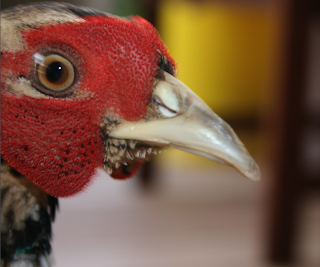 Above before and after puffing up.
shared by Conn at 9:47 AM

OMG!
Kekoa is so amazing looking! And only half his adult size?!?

What a wonderful life - out in the wild Animal Kingdom, AND Mr. Domestic as well - best of both worlds.

The only thing he needs now is a customized pheasant t-shirt: 'I'd walk a mile for mac nuts!'

You and John are such good Daddies!

He looks like a bird superhero! What exactly kind of bird is this, Conn?

It's true Mimi... He does look like a superhero... the transformation is crazy. We have conflicting reports and research that indicates he could be a Ring Neck Pheasant or a Green Pheasant. We are not 100% sure since it said that the 2 interbreed... so he could be a mutt.

aww - isn't he so sweet to wait until you're up to request his mac nuts!

do you get worried when he doesn't come around for a few days??

Angel:
You would scream if you saw him in person. Have fun on your trips.

Deb:
I guess we have raised him well. He is a bit on the aggressive side with John and has started to chase him about and peck at him. I think I was more the "mother" figure so he has not yet shown that towards me. But it is his coming of age and he is a wild bird after all.

When he is gone a few days we are more curious as to what he is doing rather than worried. He is messy so a few days gone here and there... or longer is not a bad thing.

Kekoa is so handsome!!!
We've enjoyed keeping up on his progress and reading about your adventures. Thanks for sharing.
:)