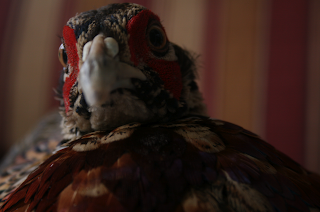 Last week I posted about Kekoa being M.I.A. We got some information a few days ago regarding his whereabouts and it goes a little something like this:

Our friends Nikki & Justin who have met Keoka were talking with a friend of theirs who had recently moved somewhere down near us. He said that there was this couple who had found a pretty tame pheasant a few weeks ago and they took him in. Nikki and Justin were not believing what they were hearing and told their friend about us and our adventures with Kekoa. They went to show him pictures here on CFC and they were doubly shocked when they saw the "Have You Seen This Bird?" post.

So their friend took our info and was going to try and get the couple to call us for a return of sorts. Well 5 days have passed and we have heard nothing.... That is until now.

Nikki just informed me that Kekoa was set free 2 days ago and their friend saw him out and about down the road.

I tried putting a positive spin on things by saying that maybe they were meant to look after him while we were gone. Foster parents if you will. I hope that is true. And I can't imagine what he must look like now. We have missed out on his terrible teenage phase. In any case John and I are thrilled that he has been set free again... where he should be. It was great knowing that he was ok... but troubling knowing he was cooped up in a pen.

Come and see us soon Kekoa... we will have mac nuts waiting for you!

Stay tuned right here on CFC for more adventures of Kekoa.
shared by Conn at 2:33 PM

Watch out, Kekoa might show up wearing a leather jacket and smoking cigs. Teens!