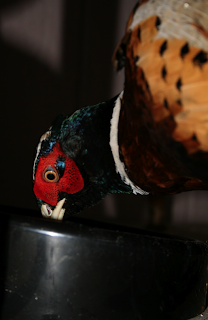 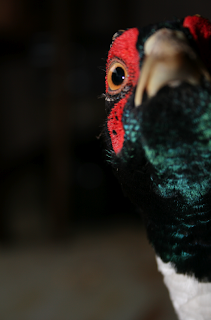 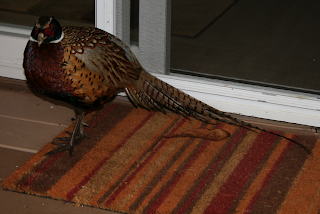 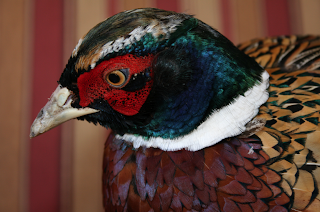 That's right... He's back!
We were sound asleep this morning when at 7:00 John suddenly woke up and said "Oh My God!". I of course thought that we had slept until noon at that exclamation. To my surprise he then said, "He's Back!". Yes sir... there he was ... pecking away at the grains we had been leaving out for all the other birds. We headed outside to greet him and he was just as calm as could be. It was like he never left. After eating his fill of grain... and yes macadamia nuts, he hopped up on his chair for a nap and has now wandered off for the afternoon.

He looks great and has grown several inches in height an length. He has also put on a few lb's and his new plumage is rockin'! When we last saw him he had just a few white feathers around his neck. Now it's a full fledged ring. His beak looks a bit worn down, which we suspect might be a result of rubbing it on the wire of the coop he had been in. That happened when we had him in the coop as well. But it will heel in a few weeks. It looks like he was pretty well taken care of by his "foster parents".

Now that we have a new camera with a video feature... we will get a vid up soon.
Stay tuned.
shared by Conn at 10:11 AM

I am sooooooooo HAPPY to get this update!

HAPPY HAPPY HAPPY.. us too!
He came back for lunch and has been lounging ever since. SPOILT!

ANd yes he is more gorgeous than ever before. It's really shocking. We did not expect such a change.
At least he did not show up wearing a leather jacket and smoking cigs.

I've been following your blog (and Kekoa) since you were on design*sponge, and have loved reading all about this beautiful bird. And I've been on the edge of my keyboard since Kekoa's disappearance! I’m so relieved he’s back…sans cigs and leather, natch. ;-)

Aloha Laura...
We are glad we could get you to let go of the keyboard long enough to post a comment. It is so much fun having him back around. He has really just gone right back to how he behaved before his disappearance. Right down to his evening walk up the hill where he takes flight to his night time roosting spot somewhere down in the valley. And he was right back at the door bright and early at 6:30 this morning. Old habits die hard.