On Christmas Day, we headed out on our ... now traditional Holiday Hike. It is our goal to try to hike a trail that we have not yet been on. Although we have done many hikes here on Maui, there are still so many left to discover. 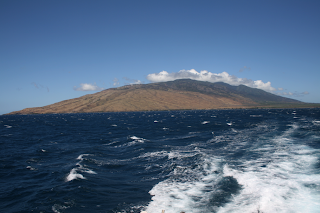 On this day it was the Lahaina Pali Trail on the Southern tip of the West Maui Mountains. In the image above (taken on a whale watch in April), the trail runs left to right, up and over this ridge to an elevation of 1600 feet. Notice the Wind Turbines for perspective of how high we were. (see photo below)

We have long wanted to do this hike, but knew it needed to be done in the winter. Usually this part of the island is very dry, hot and not very green. In fact it is extremely prone to fires in the summer. It gets very windy here as it is just above Ma'alaea Bay - the 2nd windiest bay in the world behind New Zealand. You will notice that 18 wind turbines are situated on the spine of the Kealaloloa Ridge to take advantage of these winds. In all, we hiked about 8 miles round trip.

You can enter this hike from either the east or the west. We chose the west side and here is what the sign at the entrance had to say about the history of the trail.

In prehistoric times, travelers from Olowalu walked along the shoreline to this spot and then had to choose whether to swim around the sea cliffs, find a friendly neighbor with a canoe, or climb over the Kealaloloa Ridge to get to Ma'alaea. In Missionary times, a road was built across these steep slopes and travelers on foot or horseback could make the journey in four or five hours. The 2oth century brought first carriages and then cars. The trail became a road then a highway.

Follow in the footsteps of travelers from over a century ago. Built for horeseback and foot travel between Wailuku and Lahaina, The Lahaina Pali Trail was the direct route across the steep southern slopes of the West Maui Mountains. It was hand-built along the steep, sometimes treacherous hillsides.

The trail is over 5 miles long (one way) and climbs to over 1600 feet above sea level. Along this trail you will see native plants like a'ali'i (Dodonaea viscosa), wiliwili trees (Erythrina sandwicensis), and a native dryland sandalwood (Santalum ellipticum).

Petroglyphs, etchings, stone walls and rocky outcrops mark the spots where long ago travelers stopped to rest. The mid-point of the trail is Kealaloloa Ridge, the southern rift zone of the volcano that formed West Maui. Pu'u (cinder hills) and natural cuts in the ridgeline expose the dramatic geologic history of this part of Maui. 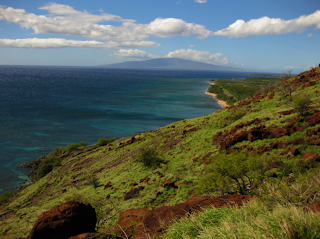 The view looking back and down towards the trail head. Lanai is in the distance. 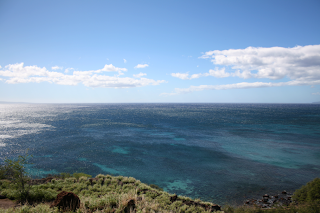 Looks like a great spot to snorkel. We actually saw a few whales while hiking, but they were too far out to photograph. 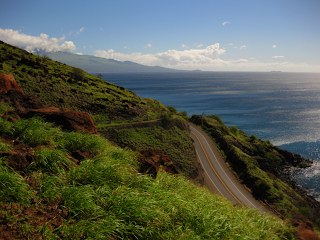 Here you can see the new highway, the first and original road mid-way on the cliff and we are on the original trail. Notice Molokini Crater in the distance to the right. 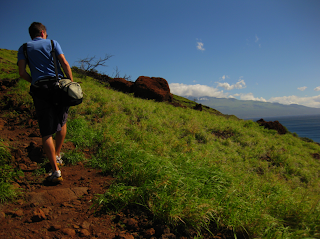 As we get higher we are able to see the South-eastern coast of Haleakala. 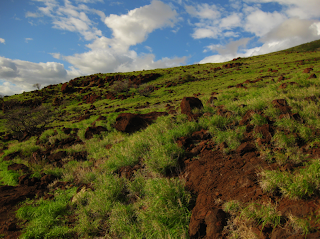 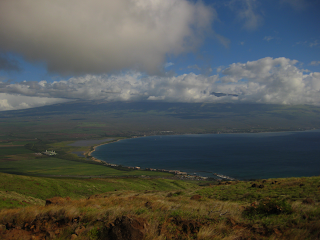 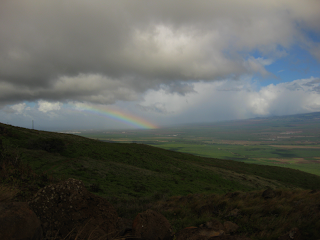 This is where we stopped for our picnic lunch. Rainbow over Kahului and views toward Haiku, Pukalani and Paia. This was also our turning around point which was about 4 miles one way. 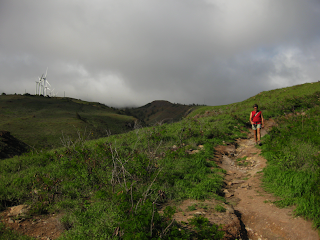 Coming back from the cloud covered East side. Notice the Wind Farm in the upper left corner. 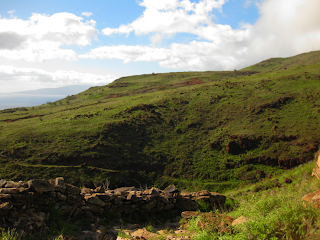 Heading back you can see the trail etched into the side of the gulches. 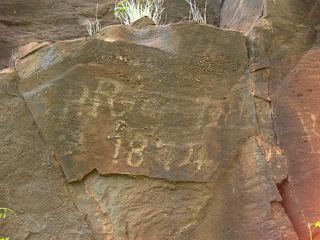 The guidebooks said to be on the lookout for etchings along the trail by paniolo's (cowboys) and school children. This was the only one we saw that seemed to be authentic. No one today would make a 7 and 4 like that. We can't make out the name but the date is 1874. 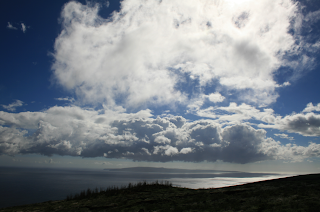 A view of Kaho'olawe under a blanket of clouds. 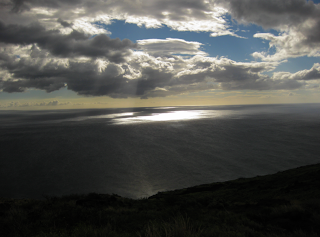 Heading back as the sun began to set.
shared by Conn at 3:00 PM

Nice pictures and nice write up about your hike. I think my travel partner and I will take this hike too but we'd like to ask you some questions if you don't mind dropping us an email at marklyn@austin.rr.com.nospam