At the begninng of February with the new moon I replanted the garden for the summer season. With the soil for the garden in place through a mixture of store-bought compost (made in Hawaii), our own kitchen-waste compost, and a pale or two of horse manure (donated by our neighbors) I planted corn, fennel, 3 kinds of tomatos, carrots, celery, gourds (ipe), pole beans, lima beans, spinach, mesculn, peppers, and cilantro. Then on the full moon, I planted beets and radishes. Here's how things are shaping up: 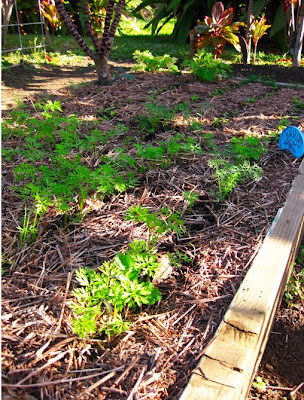 The carrots are doing very well. I made sure the soil was nice and loose. And also to water it everyday. Even if we had rain the night before, I still have to water. The soil isn't very water-retentive and also, the wind here whisks away a lot of the moisture. Mulch is always a good thing but expensive/imported. This season, I found some straw in the gulch that was originally a big patch of molasses grass the I let grow and was pruning into a bush. I got over that tedious task soon enough and took the hedge shears to the roots. It sat in the gulch for about 6 months drying out like a big tumbleweed. I'd turn it over every so often so a). it wouldn't re-root. and b). so it wouldn't get mildewy. It never occurred to me to use it as mulch until just recently and it worked out perfectly. Heavy enough to withstand the wind but light enough to decompose in a reasonable amount of time. And it makes the garden look nicer. I never thought i'd get so excited over straw! 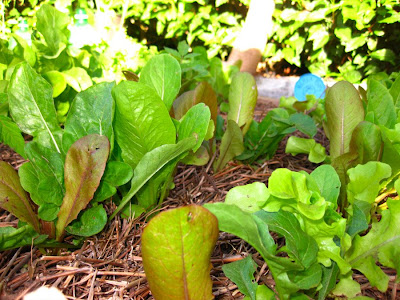 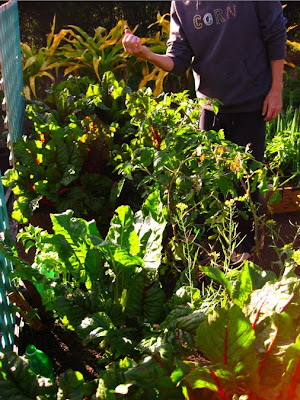 Here is a big batch of swiss chard that is left over from the summer and a renegade Beefsteak tomato plant. Both going strong! The green trellises are for the beans once they get going. I had a big problem with some pest that devoured the first batch of sprouts. So that green soda bottle is actually a cloche that I placed on every bean planted. So far, of the 12 I planted a week ago, 5 have sprouted. So far so good. In a related note, while investigating the stunted growth of the gourds, I discovered an enormous amount of cabbage loper caterpillers making there home in a nearby patches of parsley. I spent 2 hours one day just shaking the parsley and smashing catepillers. I took out about 2/3 of the whole parsley patch as extra precaution. Then squirted it with an organic pesticide. 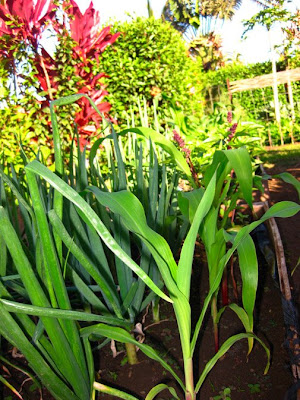 Some corn and onions. 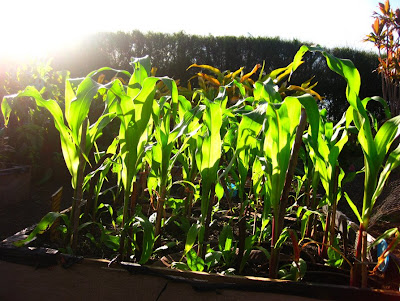 More corn that I recently had to stake because the wind was making them all lean and stressing the roots. 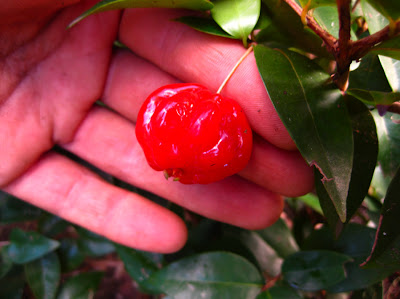 This is a surinam cherry that is growing on a tiny bush in the gulch. They aren't normally this big. It was gigantic and delicious!

I'll have more garden news, including a pic of the biggest pepper we've ever grown.
-Signed the garden geek.
shared by John at 10:00 PM

We had a huge surinam cherry bush in the backyard of our Puunene house - I haven't seen those in ages. I never liked them as a child - wonder if I would now?

Heehee - do you (or is it John??) wear your CORN shirt whenever you garden:-)

I think you should hand-pick each caterpillar and save them for Kekoa!

Thanks Deb and Parnell. That's Conn in his signature CORN hoodie. I thought it sort of ironic. We have encountered big surinam cherry bushes and are always in awe. It's not really the sweetest thing, but sweet enough to be tasty, with a tart, peppery note. I was so creeped out by the sheer number of catepillers I shifted into "kill" mode. Half of them were teeny-tiny. And Kekoa has become a bit of a food snob, I wouldn't be surprised if he turned his beek up at garden-variety insects. Though we did watch him devour a cane spider about a month ago. Ew.

EEEEE! cane spider! flash memory: My first trip to Hawaii. Its 1AM, DARK, Im alone and trapped in a bathroom of a large and unfamiliar home with a very large cane spider. Arrrgh!

Is that what those big spiders in Hawaii are called?
My friend's house on kauai always has them in the bathroom.
Are they poisonous?

Im not an expert and Im sure they have a more scientific title but, Yes Officer, THAT'S the One! Im sure if it! They are really fast and kind of erratic (so it seems) -Just to add to the terror.

ha! yes. cane spider for sure. and crazily enough, they say it's good to have them around because they are voracious insect eaters. so it's a love/hate thing with the spider. our very first encounter, coincidentally, was on kauai, in the bathroom of the house we rented. right near the commode. kind of ironic since we were libel to "let a little out" when we saw it. the body isn't so big, it's the 8 really long furry legs that freak us out. and they hop! so they can cover lots of ground if they want to.

oh, sorry james. they rarely bite. here's an informative link (with pics so be warned--but the poor fellow only has 7 legs so we feel bad for the scary, icky, creepy thing!)

Thanks for the link. It's good to know they're not aggressive, even though the 7 legged spider pictured may or may not have lost it's leg from a fight it got into with a cat!!!
After looking at that picture I know for a fact that i'm going to be checking around my toilets before I sit down. And yes, i live on the 56th floor of a highrise in NYC.

Oops - sorry John - forgot to check who "signed" this post:) Yeah, I guess who would want caterpillers after mac nuts:)

CANE SPIDERS - you'd think I'd be used to them but until the day I left they made shudder! They always seemed to run TO me instead of away when I tried to get them with a broom. The mamas liked to hang out in our shower curtain and every once in awhile I'd open up and zillions of babies would scatter. They don't need to bite - they just kill by instigating a heart attack.

i WILL be having nightmares about that scenario, Deb!

Well, I was going to comment on the excellent farming and documenting done by our Farmer John but this conversation about spiders has me itching and canceling my plane ticket I have booked for 2 years from now. I'll have to have you sign a notarized document saying that no matter what, there will be NO SPIDERS on my trip!!!

Sorry guys! I should add we lived in an old, rickety plantation house growing up, then our next home was right across from the cane field. . .so I've seen more than most! I've been back to visit just about every year for 10 years and I have not seen even one.

So travel with confidence, Chrystine!! :)

Really.
You two are amazing!
Thanks for sharing so much with the world.
xo
>s