A FRIEND IN NEED 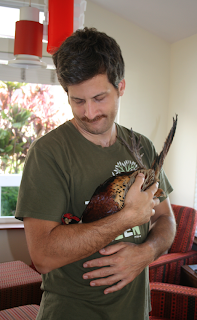 John "cuddling" with Kekoa this morning.
Most of you are most likely quite surprised by the news that we have relocated Kekoa as of today. When we got him this morning, we wavered about actually taking him to his new home at LEILANI FARM SANCTUARY. We contemplated building him a big enclosure... but that would not be fair to him.

So we called Lauralee and made arrangements to drop him off. We gathered all his grain and a bag of mac nuts, wrapped him in his favorite purple towel, which would be staying with him and we headed on over. The sanctuary is only about 10 minutes away by car which makes it convenient for visits. 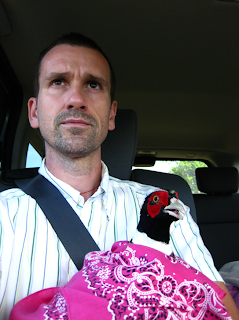 On the drive over, he was very, very calm, but panting a lot. 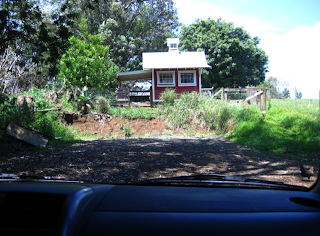 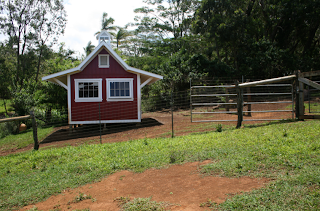 We pulled up and saw the most adorable red barn for the goats and donkey's, but the chickens running around under it. Laurelee was waiting for us on the lanai of her cottage, which she just completed. The setting is a spectacular 7.5 acres of fenced in property with lots of shade and places for the animals to graze and play. We met several of the animals... let's see, we met Akachan a sweet little black chicken and several other who's names escape us, Gordon and Nathalie 2 of the cats, Johnny, Larry, and a few other goats and then there was Blondie. 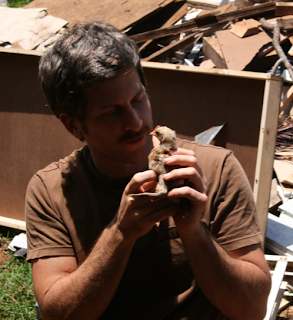 Blondie is a brand new baby chick she had just gotten from someone right before we arrived. All the animals were in heaven and you could tell they all loved Laurelee very much. Here is John asking Blondie to please be friends with Kekoa. Lauralee actually moved into the new cottage today, hence the debris. So there they are... 3 new roomies. 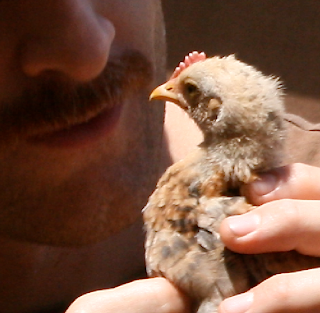 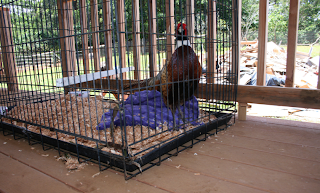 At one point Gordon, the gray cat walked up to Kekoa in his temporary cage and looked in, like hey... who's the new bird? Kekoa was a bit unsure and handled the whole situation quite well. We all decided to have Kekoa spend a few days or nights in the cage on the lanai, until he gets used to the sounds, sights and smells of his new digs. He walked right in and climbed up on the bar. By the way... he has a sweet ocean view.
We spent a good hour or so there, talking and explaining his quirks. At one point Laurelee picked him up and he was so relaxed. He could tell she is one of the good ones and we also think it helps that she is ... well... a she. As we drove off we let out a sigh of relief. We knew we had left him in good hands. Question is, will he stay there? Although the property is fenced in, he is after all a bird and could fly out. She assured us that all her neighbors are well aware of the sanctuary and have no problem with the animals. 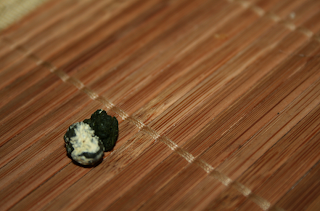 When we returned home we found this on the floor. Guess he got the last word so to speak. As the day went on, we both got a bit sad as we heard all the other pheasants crowing here at the house around dusk. When we came in from outside, we had the sweetest email form Laurelee.

Kekoa is a wonderful pheasant. I love him.

This afternoon, I brought him and the new little chick inside the house. The two birds became instant friends! Blondie the chick, jumped onto Kekoa’s back and rode around the house on top of him. Then, when I put Kekoa back on the lanai, Blondie stayed right next to Kekoa.

Kekoa has been very mellow and willing to let me to cuddle him. I’m looking forward to taking pictures for the Leilani Farm Sanctuary website.


SERIOUSLY... is that the CUTEST THING EVER? Yeah, we teared up a little. He finally has furred and feathered friends!
shared by Conn at 6:45 PM

What good news it is to hear our Blondie has a beautiful pheasant as a friend! My birds are all rescue birds that are found orphaned, injured, or ill. They are rehabilitated and released, or in Blondie's case given to a loving soul. Your pheasant is a very special and lucky bird! Aloha, Ann

Aloha Ann, Blondie was too too cute. We are hoping they become great friends. They are both lucky to be at LSF.

Ahh - more of this sweet sweet story! So John planted the seed in Blondie's ear:) I just can't believe this fairytale. It sure sounds like he's going to have a beautiful life with beautiful new friends. . .but it sure is sad that you'll have to miss each other:(

Oh my gosh- the poo!! Kekoa only wanted to leave you a goodbye present the only way he knew how! ;-)

How sweet,I love this. Have you considered a children's book about Kekoa? You are both quite talented...

I thought this fairytale was going to end with you guys taking home a few chicks so that you could build a coop and produce your own fresh eggs.

You guys did the best thing ever for K. I hope he continues to be happy there - the way you described the place, heck - I WANT TO LIVE THERE at the sanctuary! We could all use a little TLC, an ocean view, and friends!
xo to K and to TheAlohaBoyz.

Parnell Corder said...
This comment has been removed by the author.
7:34 AM

Aloha everyone...
Thanks for the comments.

We are going to get some chickens one day... we have some construction coming up, so it will have to wait until then. A children's book is always on our mind. It's just that we don't have an ending yet... which therefore could make it a series?

Happened by your blog and found this gem of a story - yes, perfect childrens book material! Tears pricked at my eyes when I read the letter from Larelee... great stuff! A beautiful blog.