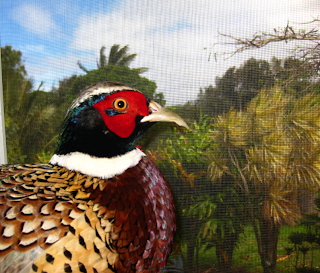 Longing to go outside.

Today marks the one year anniversary of us finding Kekoa, so we thought it fitting to send him back out into the wild today which sort of brings it all full circle. We sent him on his way and told him to be nice and stay out of trouble. 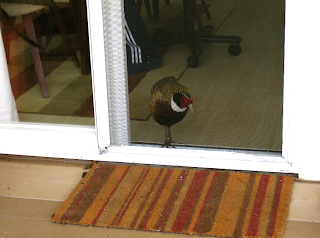 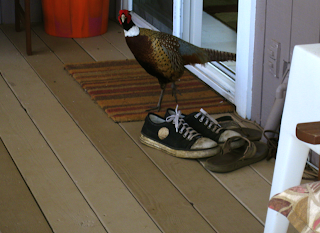 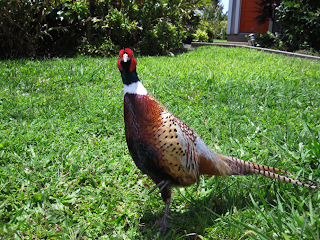 REALLY? AM I REALLY FREE TO GO?

We took the cast off two days ago and he was using the leg quite well. As of today he was doing really well, but he still pretty much stands around on the right leg. There is a bit of a knot on the left leg at the site of the break, but the swelling had gone down in both his leg and foot. He has even regained the ability to move his toes which enables him to scratch his head. 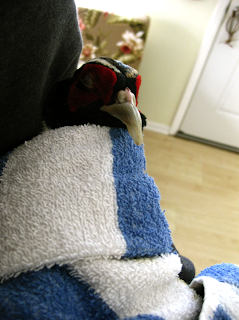 Taking a nap while removing the cast. We wrap him in a towel to keep him from flapping around and it protects his feathers. 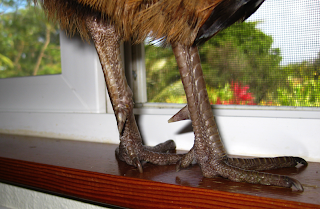 You can see the knot just above the left talon. 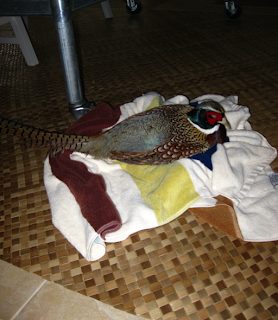 Another nap time. He does like to nap on the floor next to us.
Over the course of the last few days as he became more able to use the leg, he began attacking our feet. He just could not stand it. It kind of makes us think maybe he tried to peck someone or got to close to them and they might have kicked him away. It is pretty freaky when he puffs himself up and comes at you. And he has drawn blood a few times. It's hard to say what happened exactly.

As I was typing this... a neighbor... 2 house over came by. We started talking and we found out he has had many issues with Kekoa attacking him and his girlfriend over the last few months... which we had heard of a few times. He showed up there today apparently on the attack. They say they are pretty accepting of his behavior, but they have their limits and have "had" to kick him away. Could explain the broken leg. Some others may not be as forgiving.

I made a call to LEILANI FARM SANCTUARY not expecting them to take him, but just looking for some advice. Laurelee, the founder said she would be happy to take Kekoa in and that he would be her first pheasant. We are grateful and hope that it works out. We are going to make a trip and see if it is the right fit. They have lots of chickens, cats, a few donkey's and goats. If not we can always go pick him up and figure something else out.

Even though he is not our "pet", we kind of feel responsible for his and the neighbors well being. If it were the other way around and someone's pet was causing us trouble, we would expect it to be taken care of as well.

We hate to do it, but we had talked of the possibility a few days ago. It's for his own good. It's hard making the decision to help a needy animal... a wild needy animal at that. You think you are doing a good deed, but in the end it really endangers the animal. He has too much human contact for being a wild and at times aggressive bird. And we cannot keep him in a coop for the rest of his life. We are ok with it as it's what's best for Kekoa... not us. And besides, Laurelee said we can visit anytime and continue his chronicles.

The neighbor will either bring Kekoa by when he see's him or we will get him next time he shows up.

Stay tuned. This story is not pau (done).

This saga is far better than a soap opera!

I have so loved reading the story of Kekoa the past year, and am happy to hear that he will find a safe home at the sanctuary! After reading the follow-up post, it's clear that you've made the best decision. So hard to part with him, no doubt :-(
He is such a delightful character.