Ok... so it is with SOME SHAME that we report... John and I have made secret trips to McDonald's... BUT WE HAVE A GOOD EXCUSE.

You know the apple pies they sell back there on the mainland? Well here in Hawai'i they make VERY SPECIAL tropical varieties. Depending on the time of year they have Banana, Mango, Haupia (coconut) + Taro.

The first one we tried was back in March. We were a bit skeptical, but were pleasantly surprised.
It was banana... not just a strange gelatinous pudding type filling... but real chunks of banana. Last week we tried the TARO, which is a purple root vegetable that POI is made from here in Hawai'i. The taro was even BETTER than the banana. We intend on on trying every version... so stay tuned. 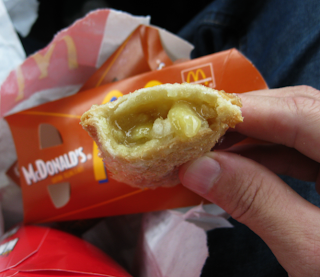 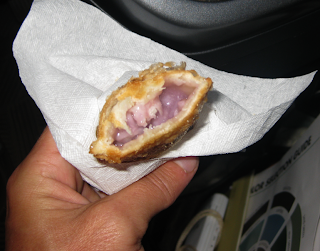 Are you kidding? I am SO going to McD's when I visit Hawaii!

I don't recall those being described in Fast Food Nation, so that must be a good sign...

Annie... they always have a good flavor all year so I'm sure you'll get top try one... do you have plans to visit?

James...they are a bit healthy... even though they are fried... RIGHT?

Whoa, that blows my mind.