John was out behind the garden on Tuesday and noticed a small nest in the MILO TREE that we planted from seed about a year and a half ago. Later that afternoon he took me out to show me. We casually looked in at it, but did not see anything. I went back later that evening to have a look and stuck the camera in the branches for a quick shot. That's when I noticed the 2 small eggs. I knew it had to be 1 of about 5 types of birds so I googled them all and found out that they are NORTHERN CARDINAL eggs. Wednesday morning I went back out for a look and saw the mom sitting low in the nest. She took off as soon as she saw me, so I took the opportunity for another shot. Now there are 3 small eggs. We will be keeping a close eye on them to make sure they stay safe. John has already told me that I cannot have a baby cardinal as a pet. HMPF! 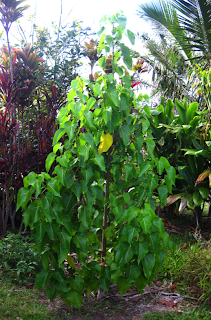 The nest is just to the right of the yellow leaf. 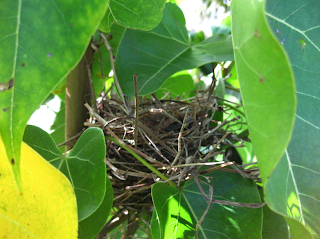 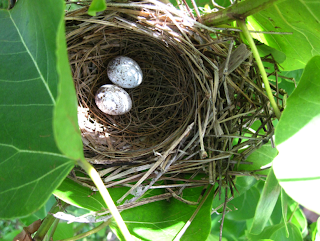 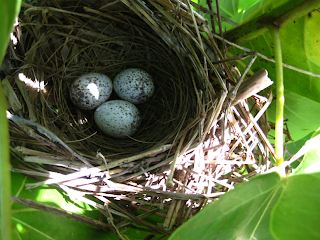 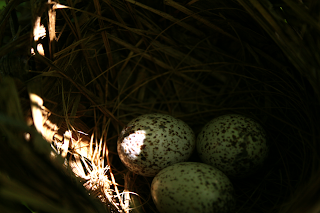 Each eggs is about the size of a malted Easter egg and spotted like one too. Notice how the outside of the nest is rather rough, but the inside is very delicate.
We are are also in the process of removing all the trim from the shed and have come across dozens and dozens of gecko eggs in the grooves of the siding. They are what I believe to be HOUSE GECKO eggs. I also found a few much smaller eggs that are more oval in shape that I think are green anole eggs. 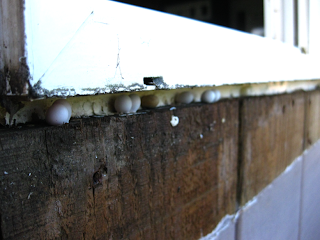 They are all glued down or on the walls with an almost super-glue like substance. I have had to pry a few loose in order to move them to a new location but have lost a few in the process. I have read that you need to keep them in the same position they were glued in so that that don't drown in the egg. I've done what I could to save and safely move them to a new spot. Gecko's are GREAT for keeping bugs at bay. 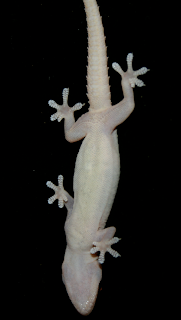 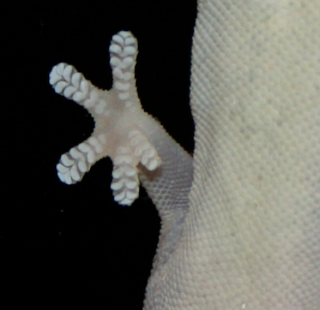 Here are a few pics of a resident House Gecko that hangs out nightly on our living room window feasting on bugs drawn to the living room lights. Don't you wish you had the ability to walk on walls and glass? 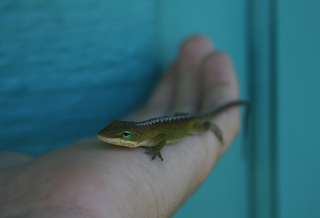 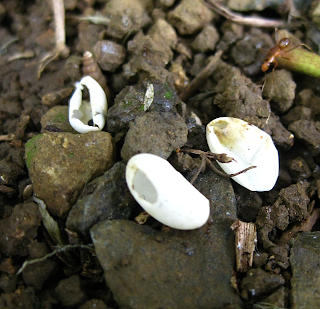 This is a GREEN ANOLE and 3 of the eggs I found the other day when I was moving a potted plant. I relocated them under a small pile of rocks and now they look as though they have hatched. These are not nearly as round as the house gecko eggs and are not glued into place.
shared by Conn at 12:34 PM

eggs with baby birdies inside! how absolutely wonderful! keep us posted!

OMg - what a find!! Just look at how intricately made that nest is - amazing work.

And gecko eggs! We used to find them near our windowsills all the time, it was like finding a secet treasure. But WOW, I never saw SO MANY in one spot before!!

gecko eggs! awesome shot of it's foot! that's so cool!