It's been a rather busy and HOT few days here at CFC headquarters. The last few days we could be found outside digging trenches for the sink and toilet drains as well as the gas line. No big deal right? Well that's what we thought too. HA! Digging here is always an adventure and this past week was no exception. The dirt here is very dense and heavy... almost clay like at times. It is also loaded with rocks. Or should I say boulders? Coming across a rock is like Christmas day for us. We love using them to landscape and we cherish them. But when we hit one, it's a shock to the old knees as the shovel abruptly stops. Then there is the occasional BOULDER that is just too big to dig out so we just need to either work around it or chisel it down. We usually work around it. John also found two full cinder blocks in his portion about 2 feet down.

In all, we dug a 24 foot long trench for the sink and toilet drains, then another two at angles measuring 12 feet long and 10 feet long. At the end is where the new drain ties in with the existing sewer line. We will also have the electrical share part of the trench that leads to the house. Oh did I mention that the entire trench had to slope until it met the existing one? Yes that's right, the further we dug the deeper we had to go. THEN... The stub out for the toilet drain had been covered in cement when the foundation was poured so I had to chisel the cement away which took about an hour. Tired yet? There's more.

We (I) also dug 15 foot long trench for the new gas line. 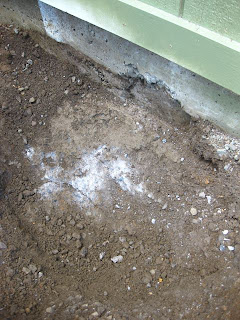 There is a stub out for a toilet drain hidden in there somewhere. 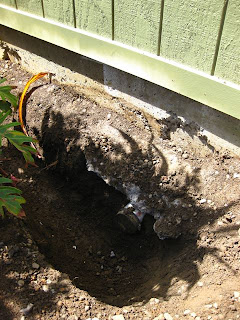 Yep. There it is. It took nearly an hour to chisel this out. Care had to be taken not to damage the pipe. 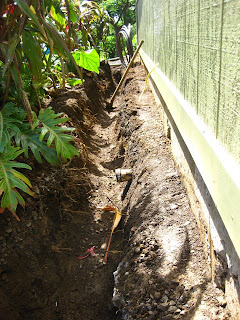 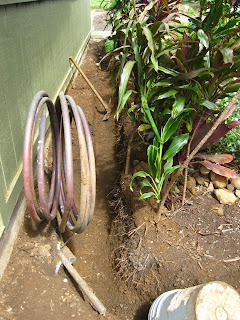 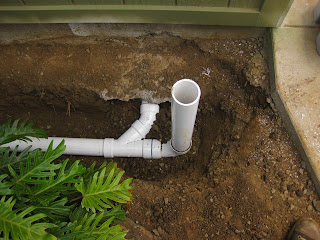 Where ever there is an elbow in the pipes, we need to have a clean out. In this case we have 4 in the new drain whereas there are 2 in the existing drain. This is #1. 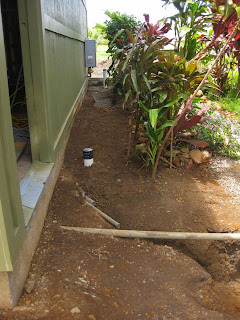 The 2nd clean out is sticking up there just by the door. That gray box on the wall is the on demand hot water heater.
The drain then angles down to the right and... 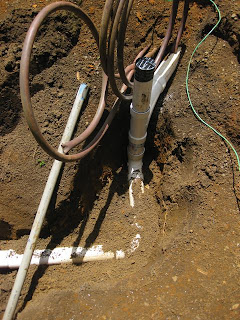 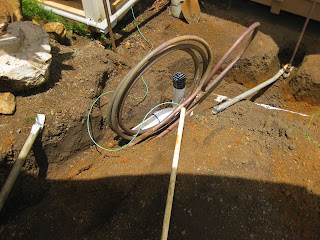 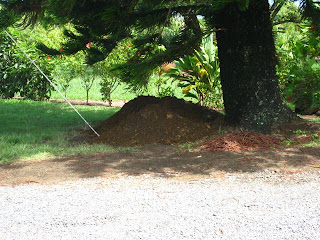 We had 4 piles of dirt like this one. How can so much dirt come from such a narrow little trench? 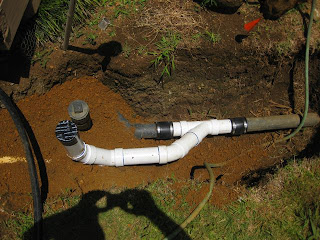 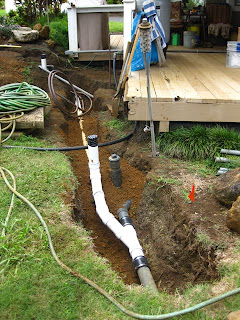 And here is clean out #4 and where the new drain meets up with the existing drain. All this for a toilet and a sink! 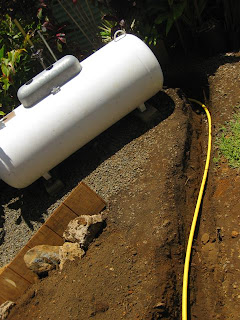 A small portion of the trench for the gas line. This was a 3 hour dig on the HOTTEST day of the year and no shade in sight.
Stay tuned for an update on the stairs and railing.

OY VEY IS RIGHT! But this means we can now finish painting the bottom and start planting! YAY!