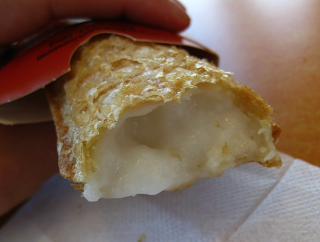 Ok... so it is with SOME (more) SHAME that we report... John and I have made another trip to McDonald's.

You might remember when we posted about the VERY SPECIAL tropical variety pies that they offer here at the Hawai'i McDonald's. Depending on the time of year they have Banana, Mango, Haupia (coconut) + Taro.

Right now they have haupia, which is a coconut pudding. It was good, but we still like the taro the best. The haupia had a few odd gelatinous chunks of coconut in it and had a similar consistency and aroma of suntan lotion. It might also have something to do with the fact that haupia is traditionally served cold rather than hot. Not bad, but not our favorite. Next up is mango. 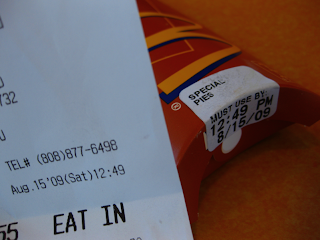 As I was finishing mine, I noticed the "MUST USE BY" date then I checked my receipt. Looks like we gobbled it up just in time. What would they have done with it otherwise? Tossed it out or simply put it in another package with a later time? Would they really throw it out? Hmmmmm.
shared by Conn at 9:15 PM

the look of it is turning me off for some reason! looks like our coconut condioner:)

makes you want to hang out by the trashbins at closing hour;) or hopefully they go to a homeless shelter or similar?

you disgust me. Now its in my head. Thanks for activating those taste glands. Fight it! Fight it!

@deb: yes a bit like conditioner. i certainly hope they do give them to a shelter.

@parnell: oh please. i know you go by McD's on the drop of a dime. come on... do it, do it, do it. then stop by the gas station and grab a bag of gummy bears and a kit kat.