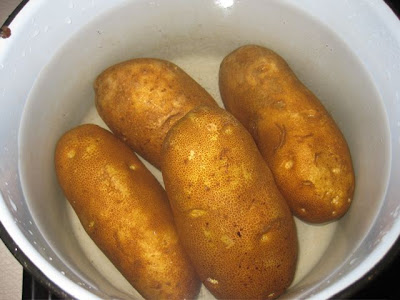 A few years ago, my mom tried to show conn and I how to make gnocchi di patate (potato gnocchi) but we didn't have the proper kitchen tools so they came out mushy and clingy. So later that year, she gave us a ricer (think large-scale garlic press) hoping we'd be churning out the gnocchi like professionals. Alas, that didn't happen.

So on this visit, faced with a big ol' Costco bag of large, starchy, Idaho baking potatoes, we figured we'd finally put that ricer to use and attempt the gnocchi again. Here's what we did, without measurements because my mom doesn't measure anything when she's cooking... only when she's baking. This batch gave us dinner for 7 or 8 (we actually froze about half).

Put the potatoes in a pot of salted water and bring to a boil. Cook until they are fork tender. It's important that you use the starchy baking type of potato. 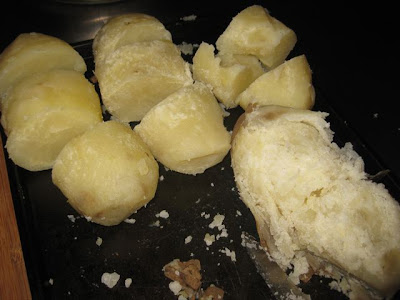 Let the potatoes cool until the are warm and easy to handle. Peel them and cut them up into pieces that fit in the ricer. The cut pieces here in the pic fit perfectly into our ricer. 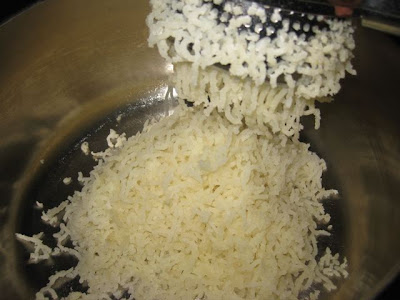 Squeeze out the potatoes into a pot or bowl that you can then mix the dough in. It's sort of like Play-Doh Fun Factory. Very cool. See how they get all delicate and stringy? You can't just used mashed potatoes, they need to have some solid bits in there. And also be sure not to let any large pieces of potato fall in. We only riced 2 of the very large potatoes to start out with, otherwise the final dough would have been too large to manage. And if you decide not to make the full recipe you'll just have leftover boiled potatoes that you can make potato salad or mashed potatoes with. 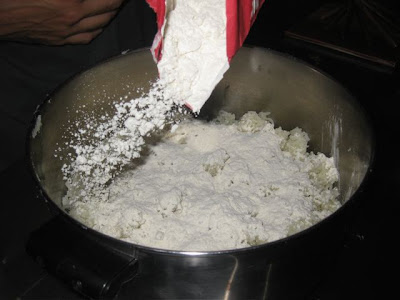 Here we are sprinkling all-purpose flour over the potatoes. Start with about a cup and a half of flour. Then add 1 egg. Remember to reserve the other egg for the second batch. 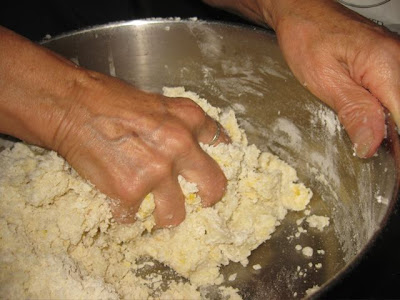 Then blend the flour, potato and egg together with your hand until it holds together. Add more flour if it's too wet. Or alternatively, more riced potato if it's too dry. It should start to form into it's own loaf-like shape. 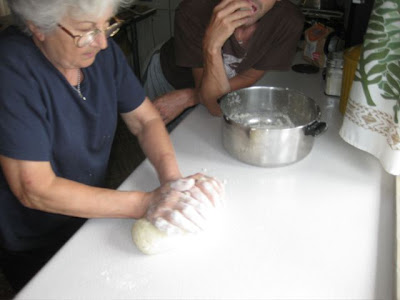 Place your dough on a floured surface and lightly knead it until all the ingredients are incorporated. You'll have to tell by touch and by the look of the dough. Conn tried to resist the lure of the fresh boiled potatoes but eventually succumbed. 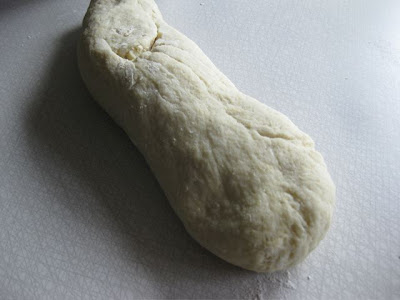 It's going to feel light and soft... sort of like the top of your hand between your thumb and index finger. It's not nearly as firm as a bread or pasta dough. 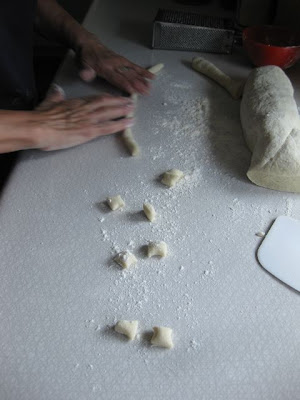 Then cut 3/4 inch slices off the dough and roll them out into a rope-like shape that's about 1/2 inch thick. It doesn't matter how long it is because you will then cut off little 1/2 inch pieces. It may help to have a small pile of flour near where you are flicking the pieces so they don't stick together or to your finger when you roll them. 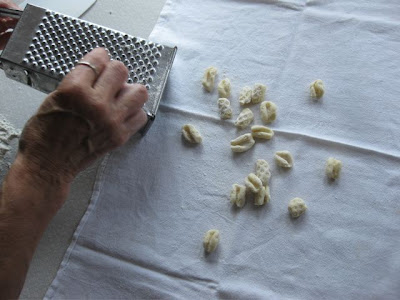 Using a box grate, nail-punch side up, dip your thumb in flour and roll/flick the gnocchi by pressing into the grater and off toward the bottom. It helps to hold the grater at an angle. The gnocchi need to curl up as you can see in the pic. So getting the pressure just right is crucial. I let mom do this part. It would be good to have a cloth spread out on the counter with a fine sprinkling of flour on top to set the gnocchi as you finish rolling them. 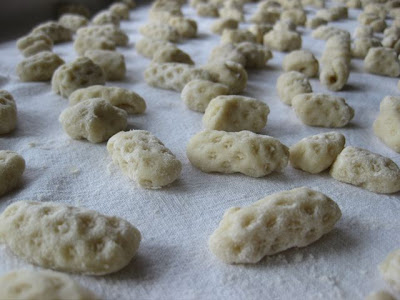 Here's a close up of the finished gnocchi. They can sit out on the counter for up to a few hours. Then you can either prepare them or freeze them. To prepare them, drop them into a pot of well salted, boiling water. Stir them gently to make sure they don't stick to each other. When they start to bob up to the surface, they should be done. They'll be firm and tender. We ate them in a simple sauce of melted sage butter and lots of grated parmesan cheese. Notice, there are no pics of them prepared because they were gone in a flash. Seriously. They were extremely ono! 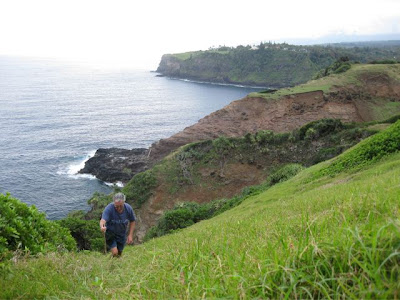 Update on mom and dad's doings... Here's Dad making the very steep trek from the coastal cliffs near the house. "Never again!" he vowed. Too steep for his 70 year old self. 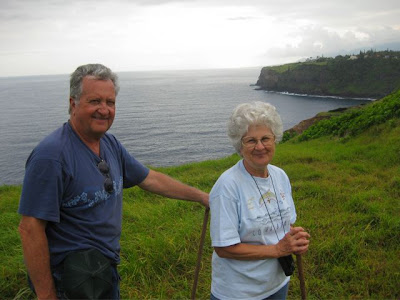 Mom stayed at the top which is maybe why she doesn't look as flushed as Dad. It was a cloudy day but still gorgeous. 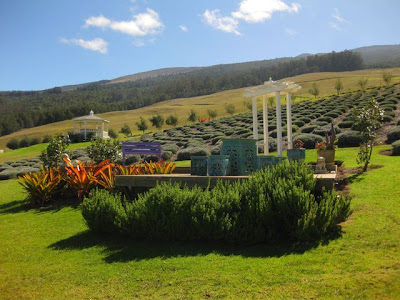 Had to post this pic I took on our jaunt to the Kula Lavender Farm. The orangey plant is a type of bromeliad i think. 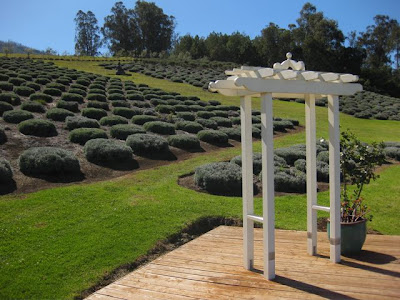 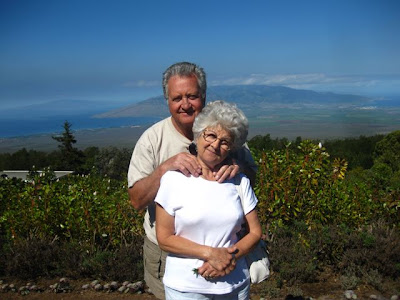 Mom and Dad stop to take in the clear view of West Maui.

Oh I do SO love seeing the pics of your delightful parents! what amazing creatures they are! And LOVE the pics of her hands making the Gnocchi. I don't get the "flick" part, tho, or how you get them to curl. And is a ricer really that much better than a box grater like in that pic? i really want to make some of this since Bean will LOVE it! I miss you guys! Oh, and the Lavender farm is outrageous! Can you and I get married there, Nu? under that white trellis? I can't wait to visit! we'll get married then, k? we can be married friends. cos i nu my nuey.
muah,
cwg

chrystine! well, mom would say, yes, a potato ricer is key. see how small the holes are? the grater will destroy the tater. The curl occurs when you press the dough pieces against the grater and push down, rolling it oof the grater. Or the old school way is to rollit down the back of a fork to give it a striped look. The dough will try to retract pulling the sides in. that's when the curl sets. did i just say that. they don't have to be pretty, try a small batch first. good luck nu! ditto on the lavender farm. so pretty. conn might have an objection though. ;)

Very well presented recipe and what a treat to see your parents. They must have had a blast and must have mentioned how proud they are of what you & Conn have accomplished, eh?
I'm going to try the recipe w the Purple Sweet Potatoes, I'll let you know how it turns out.
Aloha!

happy your parents are enjoying their maui holiday!

thanks for demystifying the gnocchi making process. i attempted to whip up a batch once and they fell apart when they met the boiling water. gnochhi has since been added to my list of foods to enjoy when someone else cooks it.

perhaps i'll try mama giordani's recipe when a ricer finally finds its way into my kitchen!

being made with mama G's aloha must have put them over the top in ono-ness. your parents - aren't they DEAR!

does the scent of lavender permeate the air when you are walking around their farm? do they pick from those pretty tufts for their products or do they have ugly, unmanicured bushes out back for that? :)