SPRAY IT DON'T SAY IT

We're finally done painting the bulk of the shed. Here's a pic showing how it looked all primed. 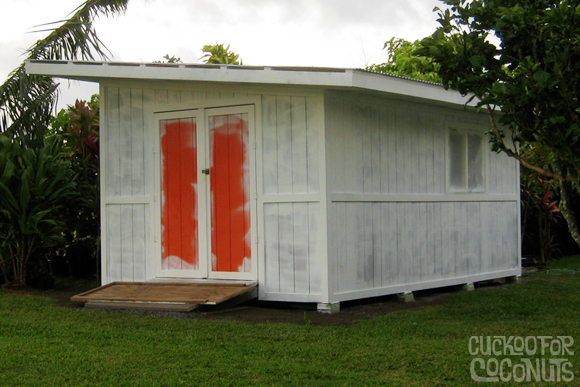 At first I thought we'd save the time and primer by just priming the parts that had bare wood, which was about one third of the surface area. The rest was painted already since we reused wood from the old shed. But then I feared that I'd encounter problems putting on the final colors. Trying to get even coverage over those two disparate tones didn't seem like a good plan, so I went ahead and primed the whole thing, only doing a light spay over the old painted parts. 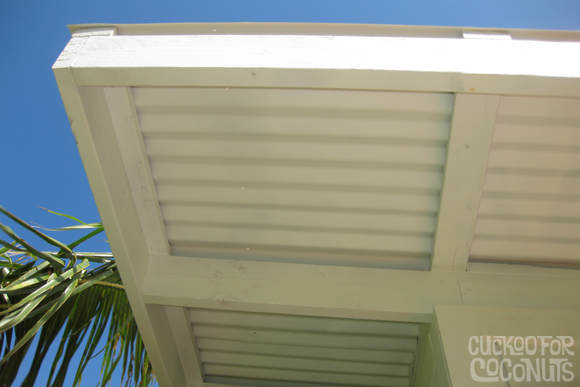 I have a love/hate relationship with our paint sprayer. I love it because it was cheap, I hate it because it's cheap! Actually, it's ok. It has served us well, but there are drawbacks--the gun doesn't swivel so I end up wrangling with the hose a lot trying to get the right position from which to spray. And it's a pain to clean and keep the spray nozzle clear of hardened paint bits. But it makes up for these shortcomings by maximizing time and effort, especially in the under roof areas that would be laborious and time-consuming to paint with a brush and roller. 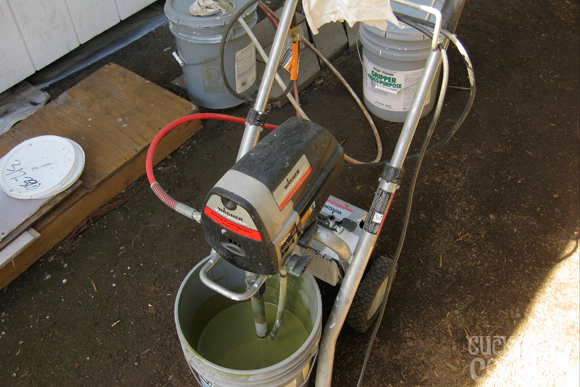 This is our paint sprayer. Costco purchase with a coupon. It's airless so the motor only kicks in when you are spraying. Also, it's not very loud. There is only one spray nozzle though and you can't vary the width of coverage. 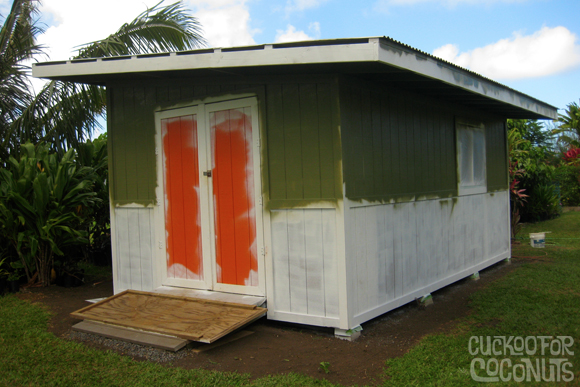 Done with the top layer of Green Grove. The bottom layer was sprayed with a color called Loam (seen in the next pic). This type of siding (known as T1-11) presents problems when using a sprayer. It has a very rough texture which means I had to hit it twice as many times as the pre-painted areas, especially when those two differently textured surfaces are side-by-side. Also, it's hard to get the paint sprayed into the grooves at the same coverage rate as the flat surfaces which means going in afterwards with a brush and just jamming the paint in there. Finally, I had to ease up on my distance and spray strength when I came close to the smooth-surfaced trim, otherwise it would glob on whereas on the heavily textured surface of the siding, that wasn't a concern. 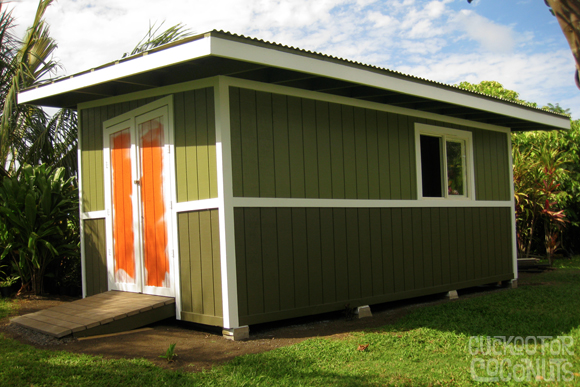 Here is the outside finished. I don't know why I didn't just prime over the orange. The doors will ultimately be some shade of orange so I guess I thought there was no need. 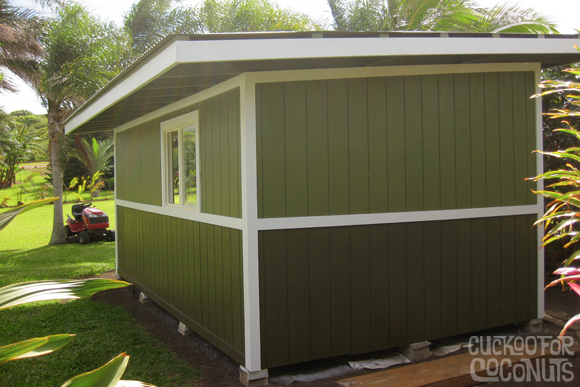 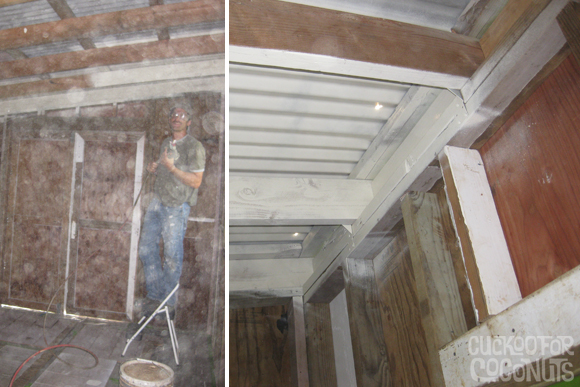 There I am spray painting the first coat for the interior. The paint droplets look like snow in the blast of camera flash. For the interior paint, we headed over to Community Work Day to see what they had in the way of free paint. They accept unopened and opened containers of paint and offer them to anyone in the community who can make use of it. We picked up two slightly-less-than-five-gallon buckets of white and mixed them together. It resulted in an off-white, vanilla color. No primer for the inside, just two coats of the free stuff. 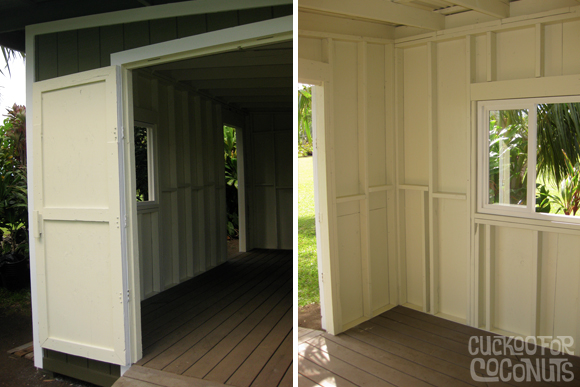 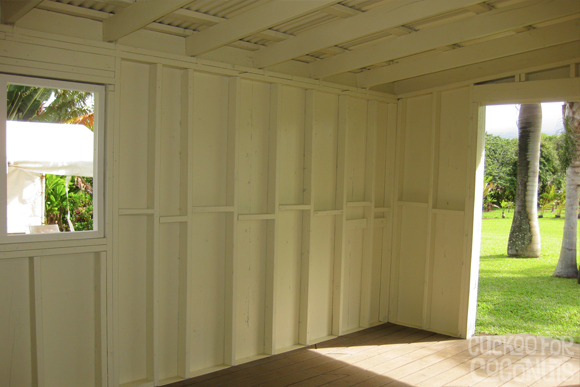 Looks fabulous! I painted my tin ceiling in my loft in NYC with a paint roller pad with a very thick cushion. Something like that might have worked for you. Gets in the crevices. How much did the final bill come to for the shed?
I had interior sheet rock-less walls like yours in my bedroom and I loved it. I used the crossbars like little shelves. I had a big old metal sliding door that didn't open, and I pretended I was living in a barn in New Hampshire. I had creaky old floors and I loved it.
I only feel comfortable in old places. In Savannah I am in a tiny brownstone with the original white Victorian fireplaces. My bedroom is Tiffany blue with green for the tile surround and the living room has the same mantle piece with yellow tile and it is painted cherry red. It is tiny and perfect and the only sound I hear from the street is the clippety clop of horses outside my bedroom window. When I lived in Manhattan I would hear the church bells and the red light from the neon on the parking sign across the street would make a lovely streak down my white living room wall. It was painted in a high gloss finish, so it picked up the light.
Diane

It looks amazing! I am especially impressed with your free paint tip. What great idea to swap opened gallons. I never know what to do with the left overs. The spray guns always scared me because of the clogging- what do you use to keep it clear? Paint thinner?

Dandy--thanks for the tip about the thick cushioned rollers... so far the bill is $640, that's for extra wood and primer and a the hardware for the sliding barn door... still need to buy a small rain catchment tank that we found that will work perfectly for us. i love the little cross bars too, in hind sight, i would have put a few more in at different levels.

Denise--mixing like colors is a thrifty solution, just be sure you are mixing the same finish--although, one portion of the free stuff we got was a flat "base" and the other was semi-gloss... so we ended up with semi-gloss as the final finish. For the paint spray nozzle, it depends on the quality of the paint... i've noticed the higher the quality, the less it clumps. if it does, i stop and wipe the nozzle and it's surrounding parts with a wet rag OR i'll turn the hose on full blast, on the jet spray setting, aim it over a bucket and power spray away the clumps from the nozzle. i have yet to use an oil-based paint in the sprayer... the cleaning instructions for that were twice as long as those for the water-based acrylics. That would be the time i'd break out the paint thinner.

yet another cute building for your little island compound.

hooray for free paint! the warm vanilla blend looks just lovely. now to fill the shed with all your garden accoutrements a la martha.

Yes, I had more cross bars at varied heights. I liked it a lot. You can still do it later, I'm sure, if you decide to.