WE WAS POOR BUT WE WAS LOVED... 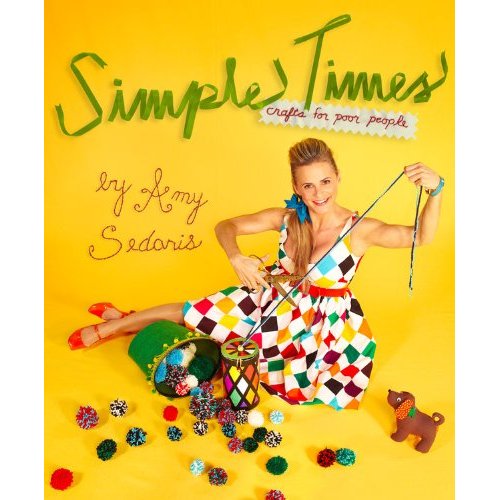 Late last year Amy Sedaris began work on her newest book - Simple Times - Crafts for Poor People - and asked me to do a few projects for it. You might remember I did paintings for her last book back in 2006 - I Like You - Hospitality Under The Influence.

She thought I would be the perfect person to make the coconut crafts and I jumped at the chance. I also knitted golf club covers, made award ribbons, and some "native" jewelry.

As the book progressed Amy began talking to me about lettering options for the cover. We have an old lettering book from the 40's that has great examples of novelty lettering and I thought she would really like the the title spelled out in ribbons.

One day I just whipped up this sample to show her what it could look like and next thing I know I was designing the cover layout. Megan Whitmarsh and Vickie Farrell embroidered the subtitle an author name. After playing with a few color versions... it would seem as this is the cover they are going with. The thing I love about working with Amy is that she is so over the top yet loves to pull back when needed. This cover is spare yet chock full of information... She has a great eye for when things are too much... or for when she needs it to be too much.

Our friend Jason Frank Rothenberg shot all the photo's including the cover and our friend Lauren Smith of The Curiosity Shoppe made the cute little dog as well as a few other amazing crafts featured in the book like felt fruit jewelry and sugar skulls.

I got to see the first draft of the book recently and can tell you it is brilliant. Hold onto your hats... it's gonna be another HIT! Due out November 2, 2010.

I'll post some of the projects I did for Amy once the book is released.
shared by Conn at 9:26 AM

what fun. can't wait to see the projects.

that is so awesome- i love her and the cover looks great! definitely going on my xmas book list!

i love it - love the yellow - love the ribbon - love her dress - and i really love the dog! Congratulations -

And with a few staples, the cover becomes a dutch bonnet! What a super fun project, Conn. Can't wait to see it and all your make-able goodies.

seriously... you will pee your pants when you see it.
it's very much in the same vein as - I Like You.
I just looked at the rough files again today and can't believe how much is in this book. some of it seems utterly absurd, but yet at the same time makes perfect sense.

ALOha! Love seeing the new Amy Sedaris cover and love reading and reading what you're doing. Have a guest from Seattle looking at your blog and she mentioned a designer friend who has a blog you might enjoy: http://www.vinyldivas.com/ She thought you'd like the album designs. Tracy, Neil and Pamela