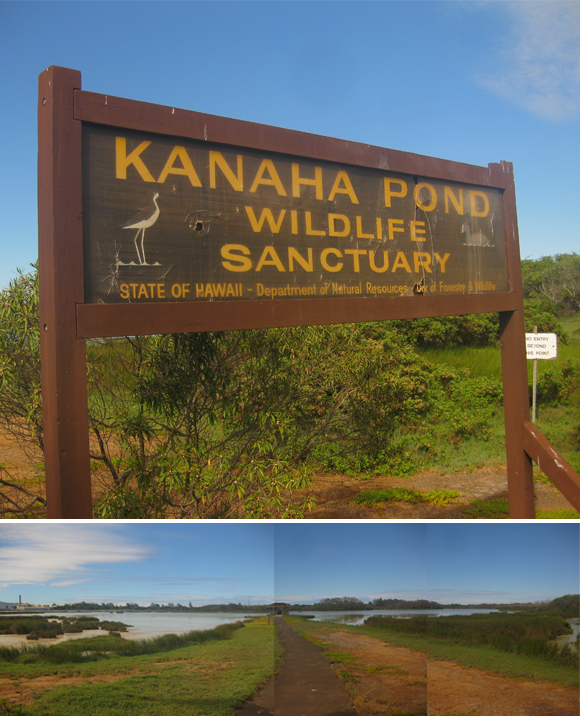 A few weeks back we finally stopped by the Kanaha Pond Wildlife Sanctuary. Once a royal fishpond, this bird sanctuary is home to two endangered Hawaiian species of waterfowl, the black-necked stilt (ae'o) and the Hawaiian coot ('alae ke'oke'o) and is only open to the public from August to May. 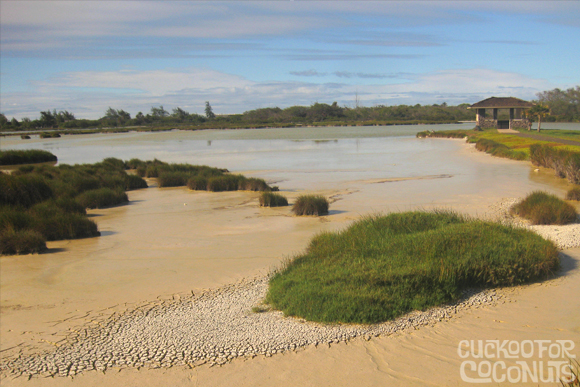 Here you can see the viewing platform. There is also another entrance on the back side of the pond near Kanaha Beach Park. The 143-acre preserve has looping paths that circle the perimeter of the wetland sanctuary through a shaded forest with native plants. There are numerous abandoned concrete World War II bunkers along the trails. Click here for more in depth reading on the ponds and how they came to be and how one was filled in and destroyed. 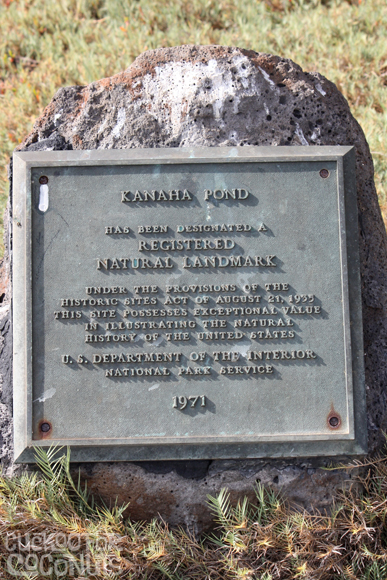 Due to the continued destruction of many of Hawai'i's wetland areas Kanaha Pond was designated a registered natural landmark in late 1971 by the Department of the Interior, one of only two such sites registered at the time.
(here is the text taken from one of the signs at the sanctuary.)
Naturally occurring freshwater marshes, ponds, and other wetlands may have always been supply on the Hawaiian Island. Wetlands such as fishponds and taro fields were created by the early Hawaiians, and wetland birds utilized these habitats. But in recent history, many wetlands were filed for land development or degraded by agricultural practices. Many remaining wetlands are vulnerable to water diversions, pollution, and invasive species.
Today, five native waterbirds breed on most of the main Hawaiian Islands. The Hawaiian coot ('alae ke'oke'o), common moorhen ('alae 'ula), black-necked stilt (ae'o), and Hawaiian duck (koloa) are in serious trouble and have been listed as endangered. These waterbirds nest on the ground, making them vulnerable to introduced predators such as mongoose, dogs, cats, and rats. The tree-nesting black-crowned night-herron ('auku'u) is holding it's own.
A number of watrefowl and shorebirds over-winter in Hawai'i or pas through on their annual migrations. The best known and most commonly seen in grassy fields is the Pacific golden-plover (kōlea). Individual birds return to the same areas every year. Along the shoreline, ruddy turnstones ('akekeke), wandering tattlers ('ulili), and sanderlings (hunakai) are a common winter sight. The pond is sometimes filled with canadian geese in the winter.
I'll be posting more about the Pacific golden-plover (kōlea) that makes our yard it's winter home. I've been taming pics of it over that last few months so that I can hopefully share it's change in color from light golden tan to almost black by the end of the season.
shared by Conn at 9:14 AM