After quite the dry spell of no blog entries, it's time to get back to it. We can now tell you what has kept us so busy the last few months.

In June we got word that our favorite publication was hiring a new Art Director.
In July, John filled that role at Maui No Ka 'Oi magazine and he now has 2 issues under his belt.

John has been working feverishly on the complete re-design for the January/February 2012 issue which goes to press in 2 1/2 short weeks. That includes a new logo, testing new fonts, interviewing illustrators and photographers, and looking into new paper alternatives.

He is a one man Art Department and for the last 2 issues has has been re-introduced to the world of magazine design. The last time he worked at a magazine (SPIN and DETAILS) he had a full Art Department to rely on. Now he finds himself wearing many hats - photo editor, graphic designer, production manager, location scout and so on. He has also been able to visit some incredible homes here on Maui for possible use in the home features. At these home shoots, he also acts as prop stylist and pet wrangler.

On a recent scouting trip to Keokea, John got to go inside the Kwock Hing Society Building, which is always locked up, the inside is not open to the pubic. It is featured in the current issue.

October found him traveling off island for a 2-day visit to the printer in Waseca, Minnesota.

I stayed busy during August and September compiling the 7 page Holiday Gift Guide for the November/December 2011 issue which is on stands now. (see attached pages below)

Not only did I compile the products in the Guide, but I photographed about half of them. What I did not photograph, I tracked the images down from merchants, which was no small production. John says I basically acted as photographer and photo editor for the entire guide which was a big help to him.

It was a huge undertaking to get products for the gift guide because I basically had to start from scratch with the stores and vendors. I did not have a single contact. It's been great fun for me to get to explore the island and meet new people. Kind of rejuvenating actually. I mean, I get to shop days on end and not spend any money. In some cases, companies did not have images for me to use and they asked me to shoot products for trade. We have quite the supple of salt and honey.


At present, along with my other freelance work,  I am also compiling two Great Finds pages for the January/February issue. One on Luxury items and the other for Golf Items. Great Finds is basically a page of "must have" products that I locate around the island. This is also a recurring gig for each issue!

Most of you know that we left our office once a week at best when we worked from home. Now John is on the road to Wailuku most days and I have can be found cruising around the island in search of items to feature in the magazine. While we loved being home all the time, it's fun to get out and see behind the scenes of Maui.

In January I will be getting back to my fashion roots as I will be styling a 6-8 page fashion story for the March/April issue. Booking models, hair, make-up, and pulling all of the clothing to be featured. I can't wait for that project.

Mahalo for bearing with us... and we hope to be posting more now that things are a bit more established with our roles at Maui No Ka 'Oi. 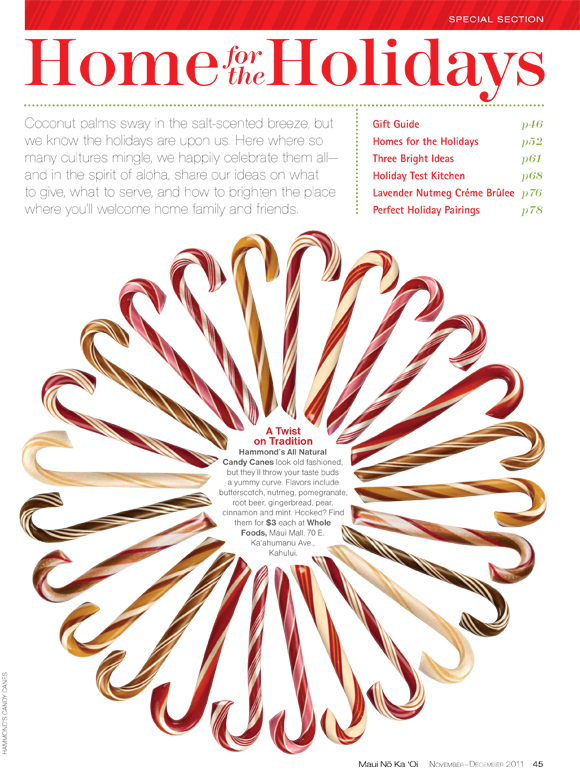 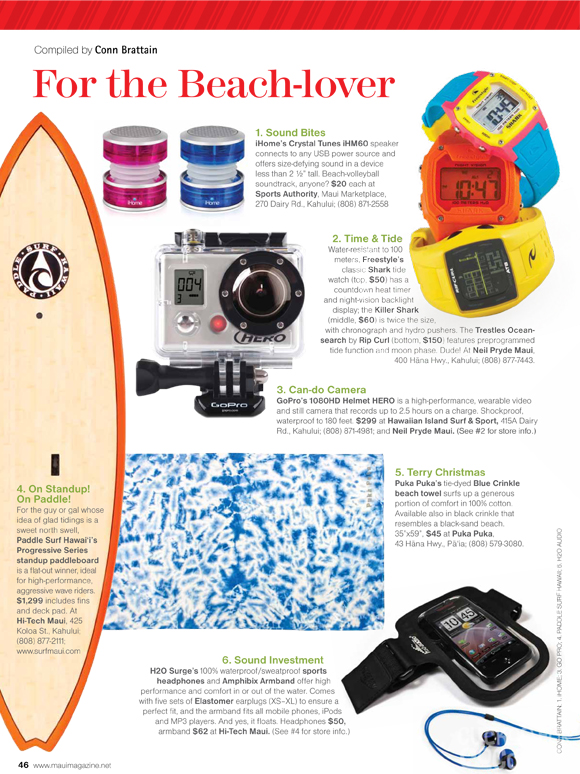 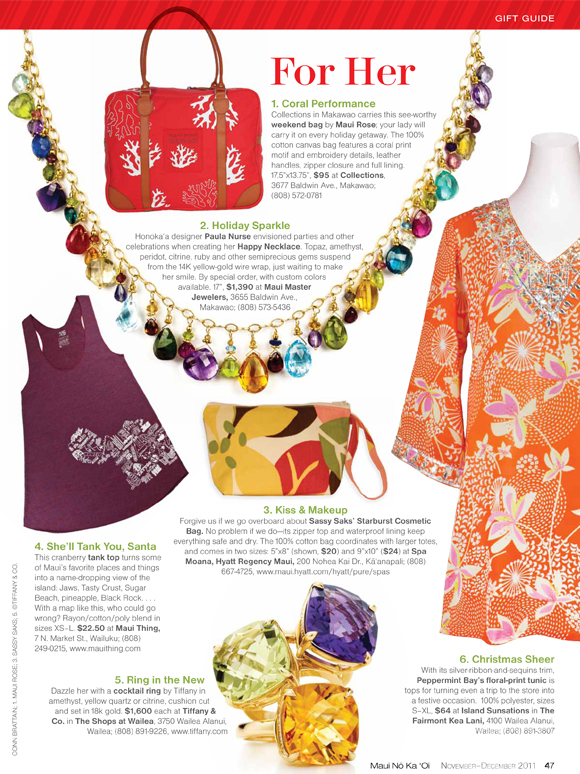 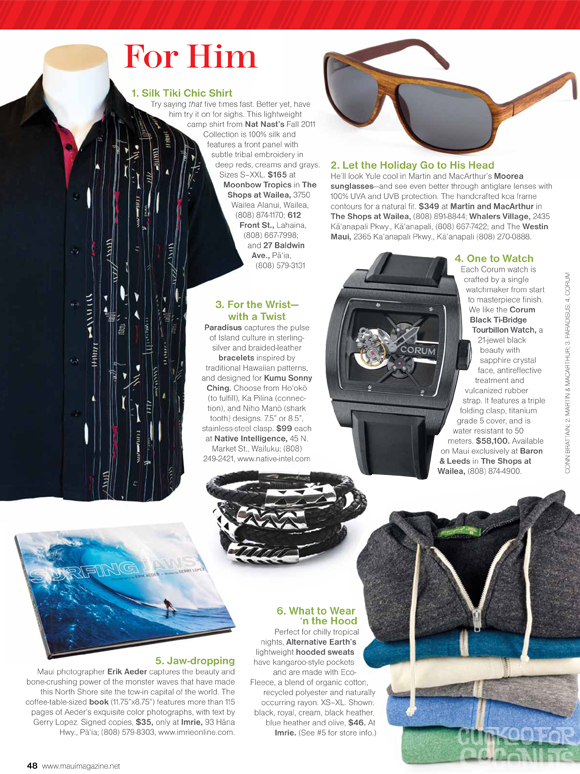 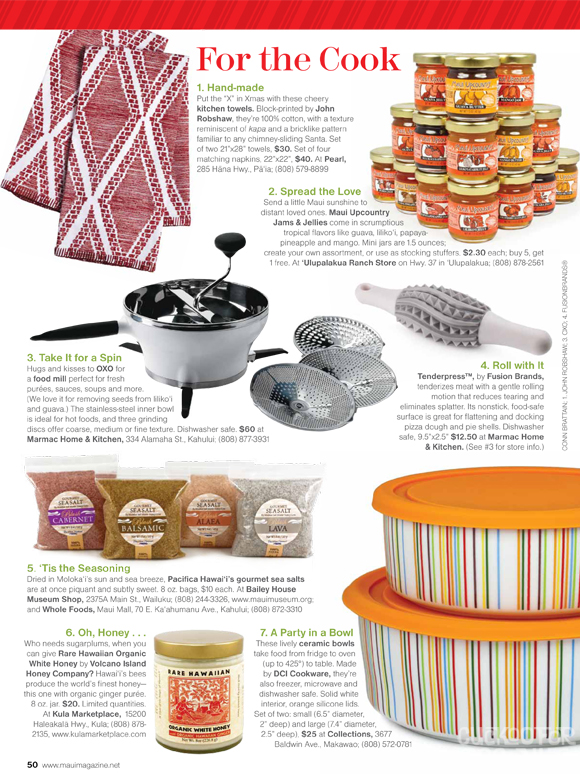 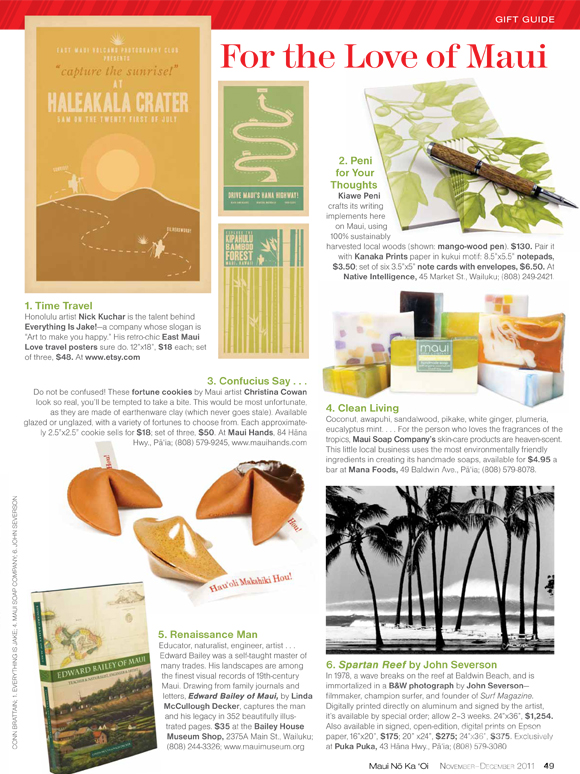 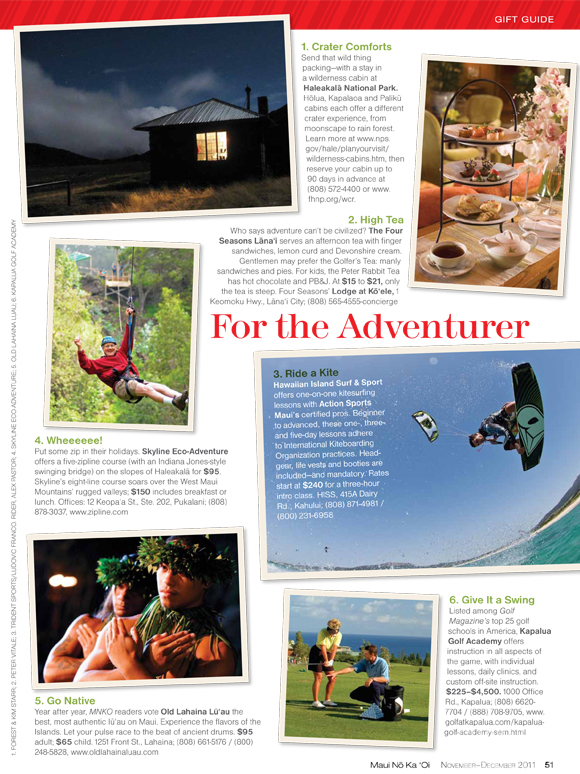 the candy cane wreath is gorgeous, conn! love the peek of your super cool pop-up photo studio . . . is this how pros create pretty product shots?

the candy cane wreath is the genius of the art director, but i did talk him into using them as the section opener. as for how the pro's do it… well… i just got that light tent... 2 of them actually.. a 20' and a 30" with lights. i didn't have time to "learn". i just dove in. the first results were pretty good.