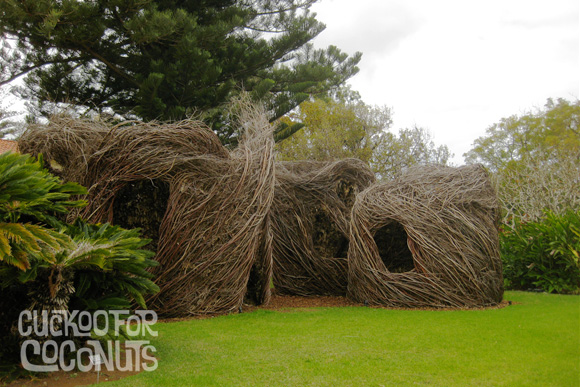 Back in January, we had the pleasure of welcoming my old friends Heather Ellis and Jamie Lane to our humble home. Heather and I were pretty much inseparable from the day we met freshman year in college. And I met Jamie when visiting Heather in Austin. They traveled from the windswept plains of Omaha, NE where temps typically fall well below zero this time of year. Needless to say, they were thrilled to be on Maui. They had planned this trip about a year ago, which was before I had a full-time job so I didn't get to spend as much time with them as I originally planned. (pouting sad face here). The first day was clear so we headed upcountry to see some sights, on the way down we stopped into the Hui No'eau Visual Arts Center to see the installation by environmental sculptor Patrick Dougherty. For more info on that visit this page on the Hui's website. 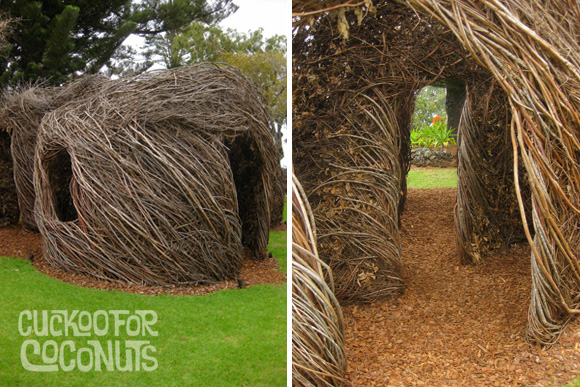 It suddenly dawned on me as we approached this environmental sculpture that Heather must be having kittens over it because it's kind of what she did for her senior installation project in college. Well, the idea of it anyway. She had created a beautiful bed headboard and foot board, of maple wood I think. And she managed to get a small room all to herself in our senior show. I helped her gather up what seemed like tons of sticks and vines from the wilds of Westchester in early spring. For the installation she had taken all the sticks and vines and recreated a woodland scene laced with winter decay and drama with the bed pieces being enveloped by nature. Ok, so, maybe my comparison is a bit of a stretch, but you get the idea. 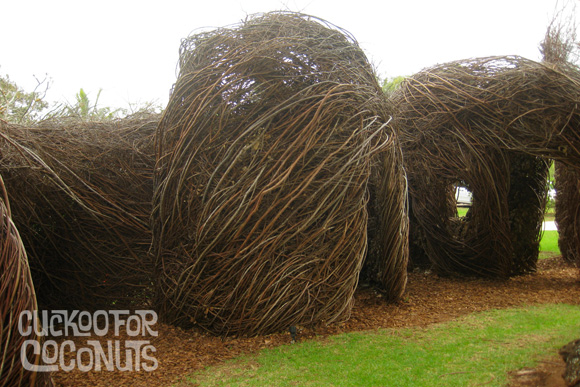 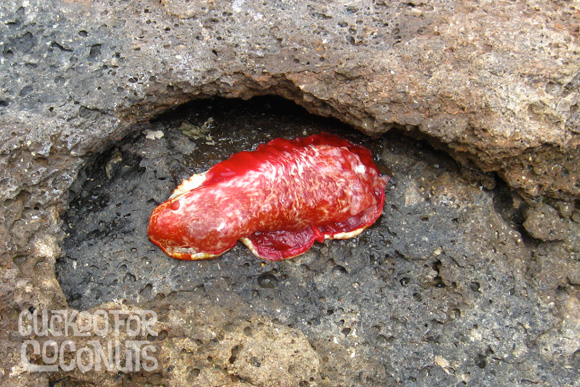 I took Jamie and Heather by Baby Beach just to check out the unusual landscape there and we spotted a Sea Cucumber undulating and seemingly desperate to get back to the old blue. We debated as to whether to try to help it along. But after some Google via smart phone research we decided not to. Too many potentially disgusting defense mechanisms such as "inverting it's innards out of it anus to appear dead" dissuaded us from interfering with what fate had in store. 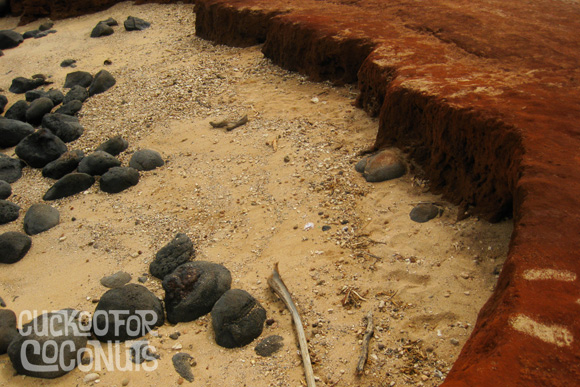 Here's H & J at La Perouse Bay where the landscape inspired many photo snaps. Dessert at Cafe O'Lei afterwards. During the week they stayed over on the west side of the island and took part in many activities. Snorkelling trips and whale watches, stargazing cruise and lots of beach time. 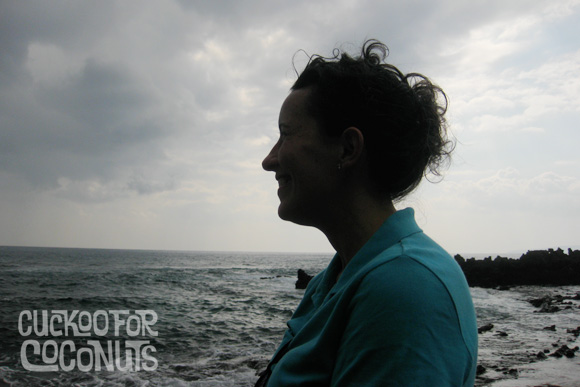 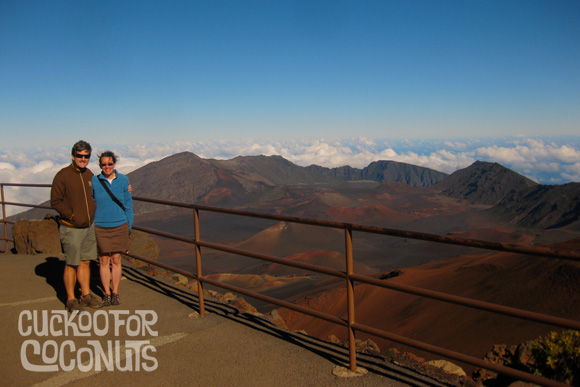 Heather and I at the moonscape of Haleakala Summit. It was dang cold!! Then we checked out the upper summit with all the telescopes. Heather and Jamie were both stunned by Maui's night sky as seen from our house. It was early in the moon's cycle, so they were treated to some prime star-gazing. Anyway, the summit scopes reminded me of a trip we took up to a solar telescope in Taos, New Mexico once a long time ago. And where we also visited the home of D.H. Lawrence and sat under a giant pine tree Georgia O'Keefe had painted when she visited him. 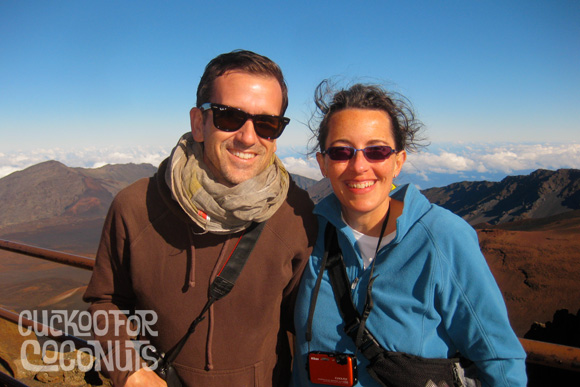 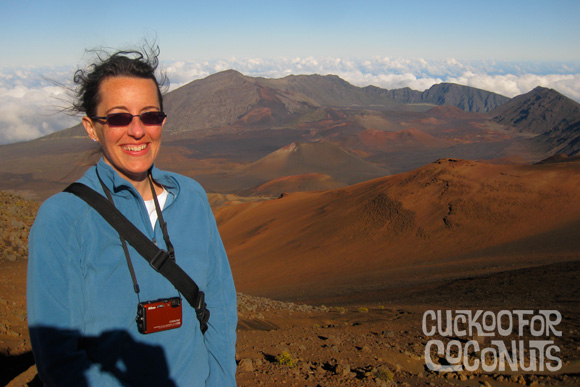 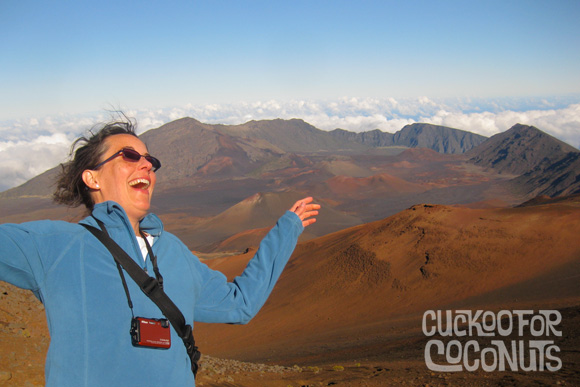 I forgot how Heather likes to pretend she's falling off the edge for pictures. So I let out a laugh and snapped this shot.  It had been 5 years since we saw each other. She looks just like she did when we were teenagers. 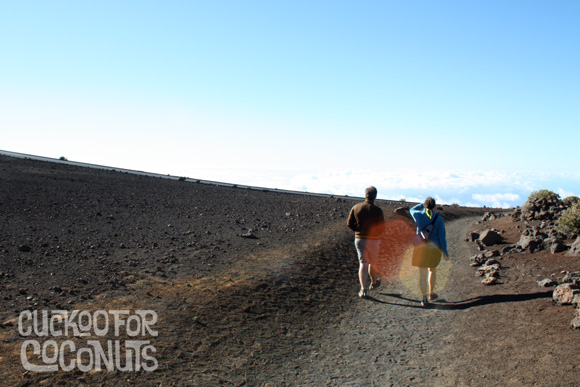 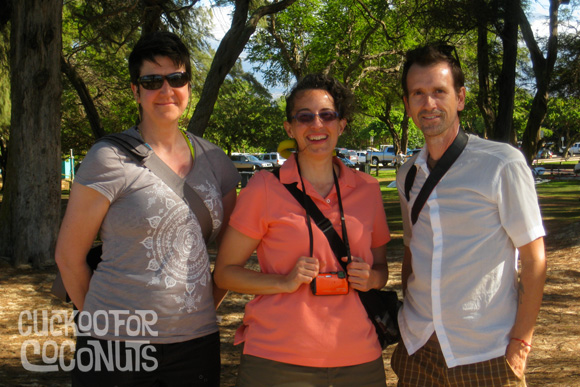 Before boarding the plane home, we took Jamie and Heather to Kanaha Beach Park by the airport to take some deep breaths of island air and say goodbye to Maui. It was extremely windy that day. Lots of windsufers and kite-boarders were out slicing the surf. 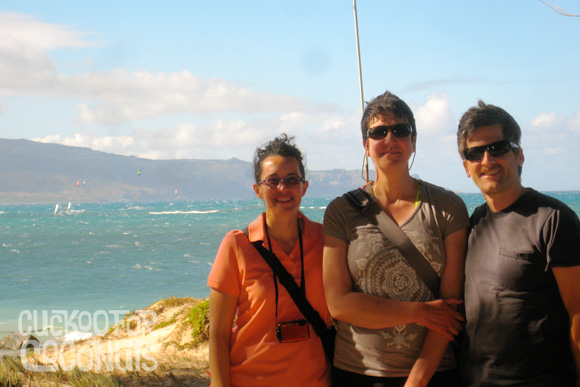 Hopefully they'll be back sometime soon!
shared by John at 10:17 AM