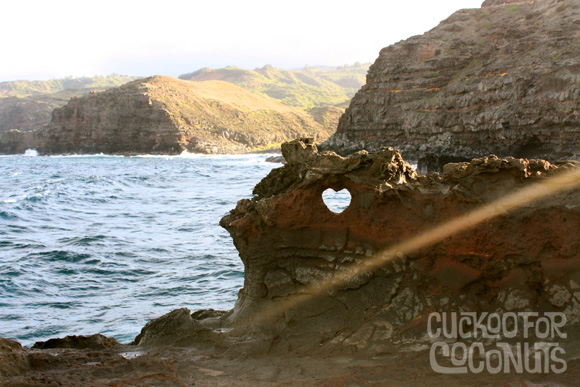 Early December of 2011 had us playing host to an ex-Funny Garbage coworker and good friend Agnieszka Gasparska of Kiss Me I'm Polish. She showed up with many gifts in tow proving her to be a house guest to be reckoned with. All visitor's post Agnieszka will have a lot to live up to! Seriously y'all. She was the sweetest, most easy-going guest who after some rental car snafu's made her way over to the west side by herself, three days in a row to go surf the waves at Launiupoko. 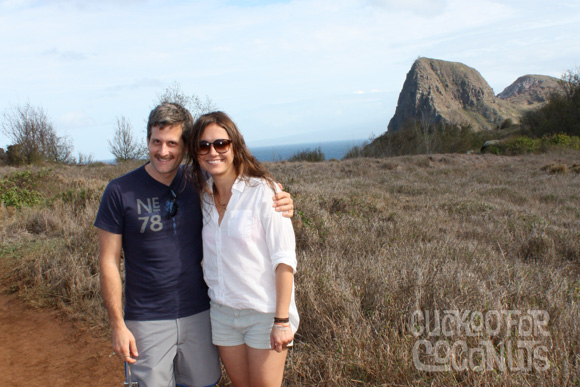 Graced with two comp days after a long and hectic closing of the magazine, I was free to join her and Conn to see the sights passed Kapalua into the northwestern areas of the island where the terrain is Planet of the Apes meets Land of the Lost. After a hearty lunch at Teddy's Burger's in Lahaina we hit the road to the blowhole and tidepools... and what appeared to be a very clear heart-shaped hole in the rock. The heart is a favorite symbol of Agnieszka's and her business. 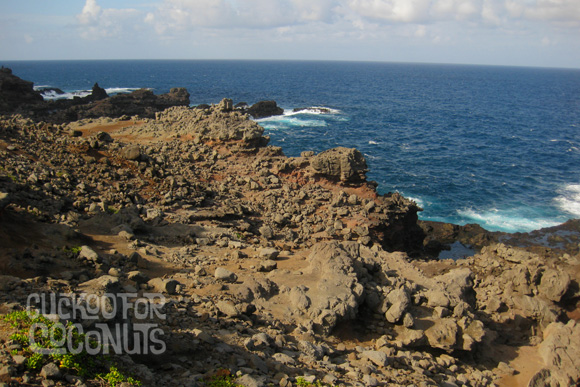 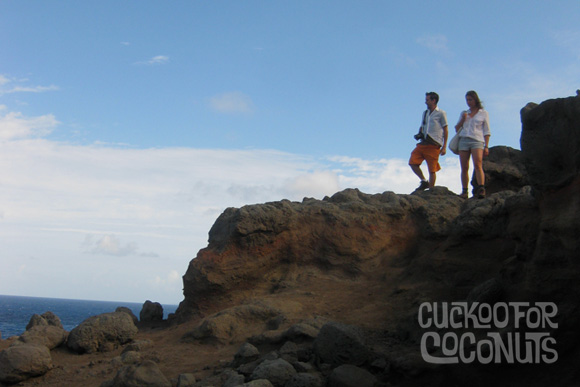 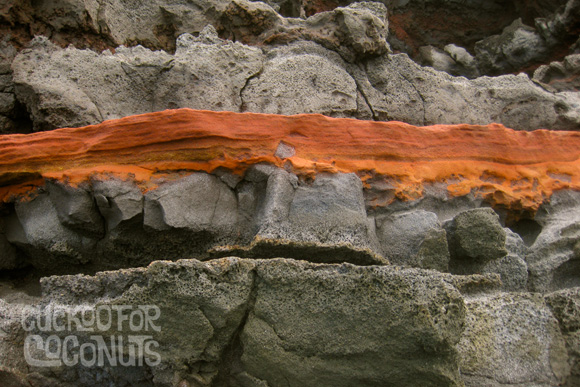 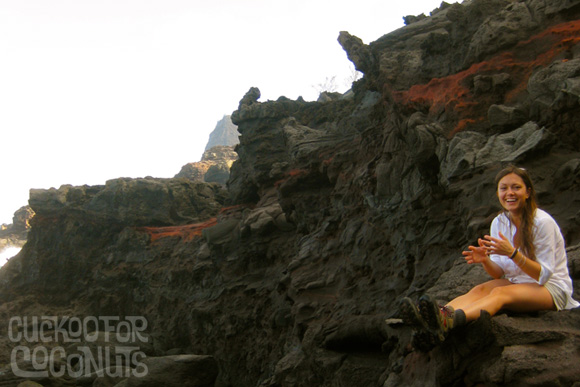 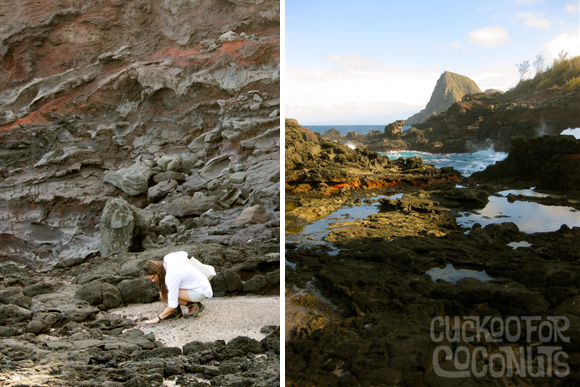 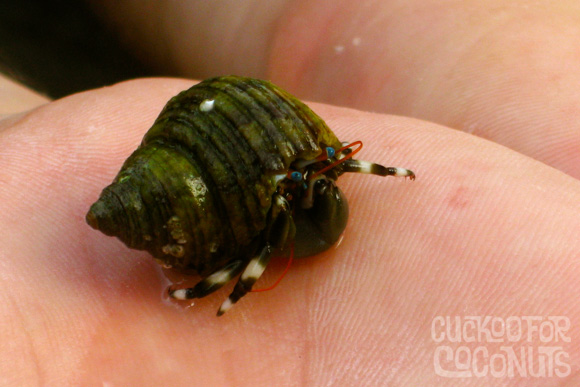 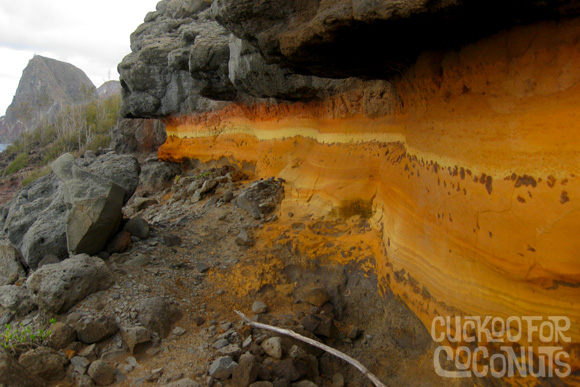 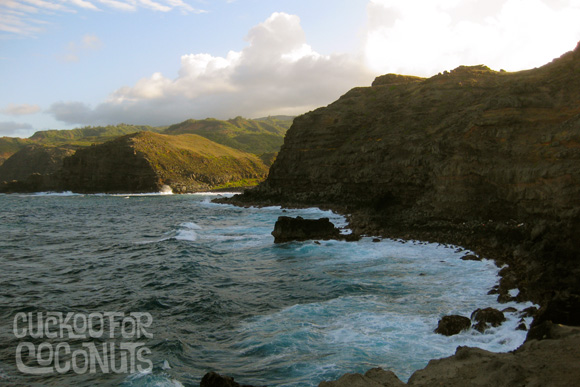 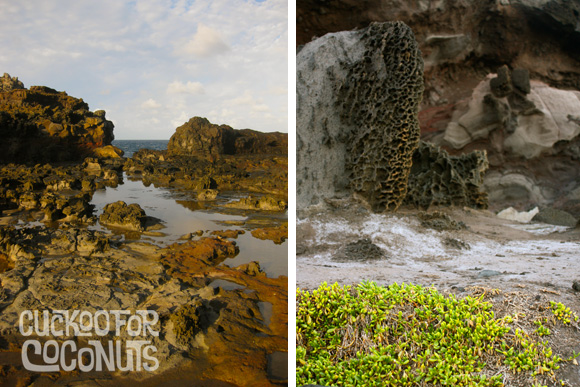 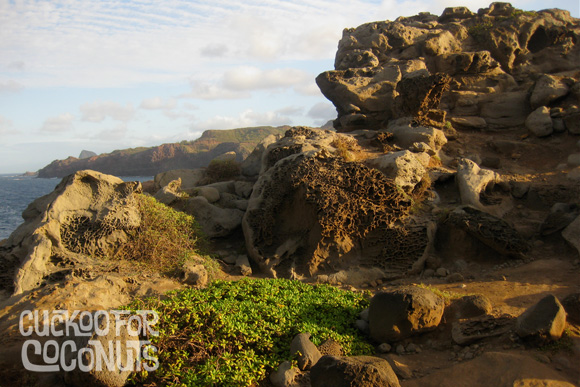 We ended our first day at DT Fleming Beach Park to watch the sunset and touch the Pacific. Then headed over to Star Noodle for a deliciously memorable meal. 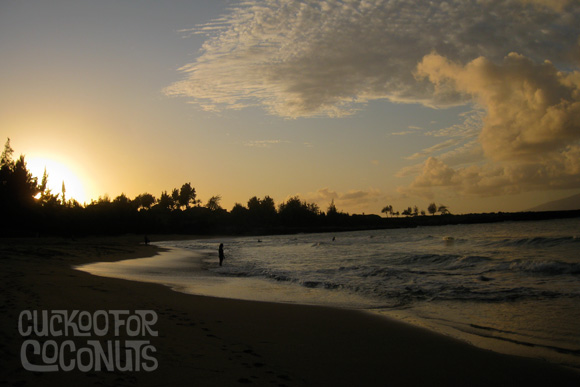 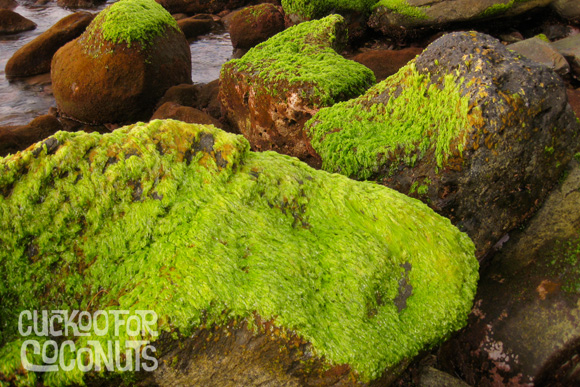 Day two had us climbing the mountain for big upcountry views and Haleakala crater. Not to be outdone, down country produced a rainbow to say "hey, look at me!" 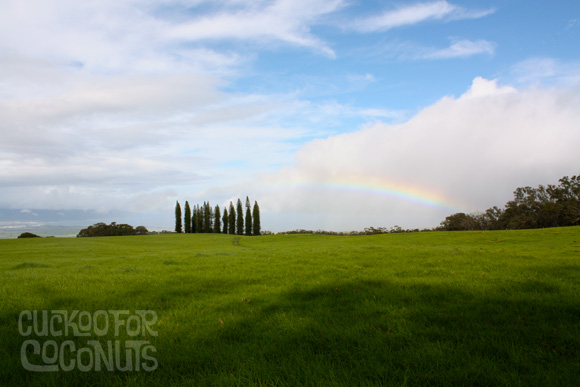 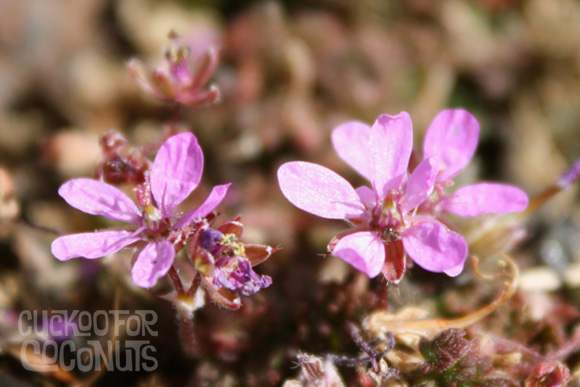 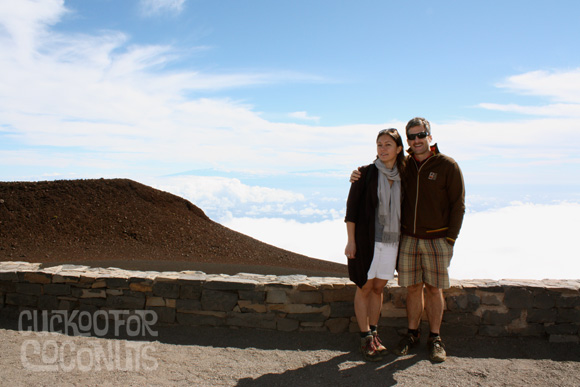 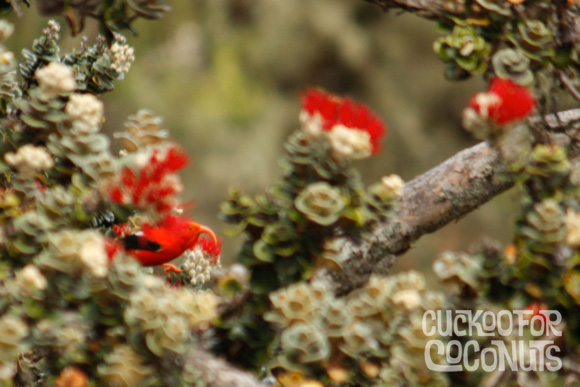 Conn put his fancy telephoto lens to good use when we stumbled upon an ‘ohi‘a lehua tree thick with blossoms and buzzing with native bird activity. The i‘iwi (above, bright red and curved beak) and ‘apapane (below, darker red) But you have to be lightening fast to catch them, thus the slightly blurry shots. We've been to Hosmer's Grove before but were never able to spot these elusive birds, we quickly realized this was a poignant moment for all of us to savour. 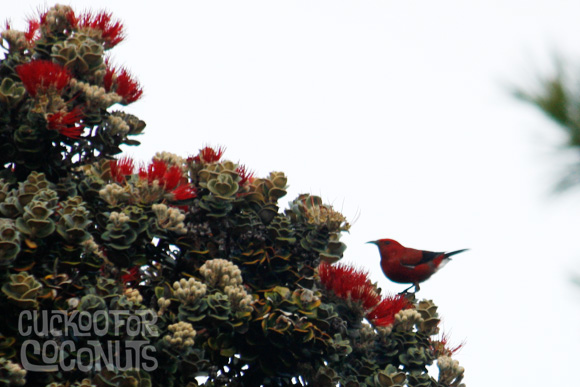 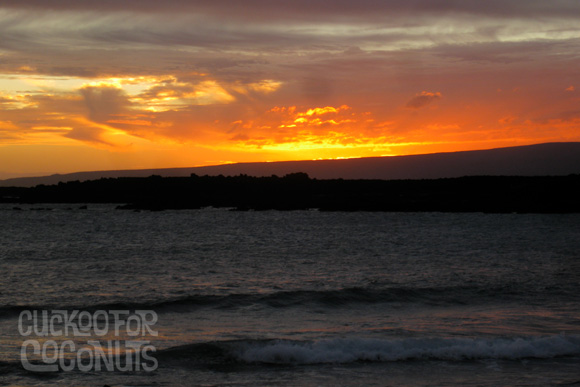 Once down the mountain, we made a hard left and headed to La Perouse to show Agnieszka the last big lava flow that happened some 250 years ago. After sunset we made our way to Sansei in Kihei. 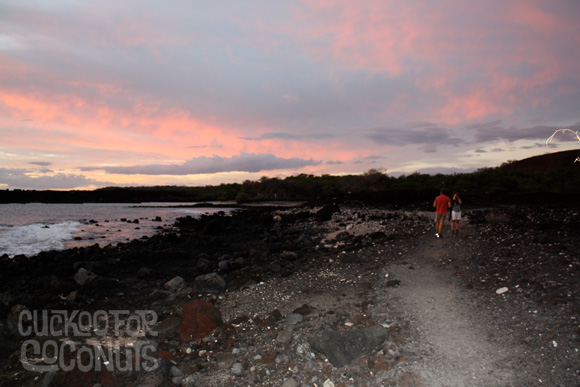 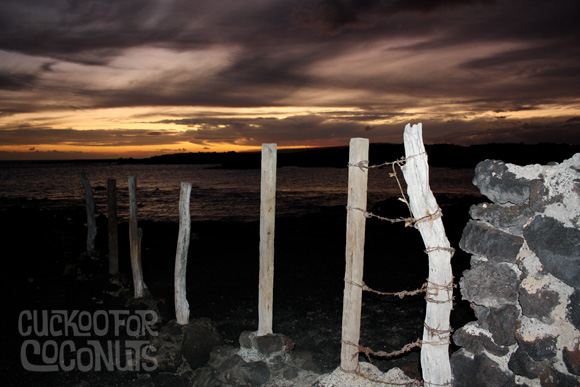 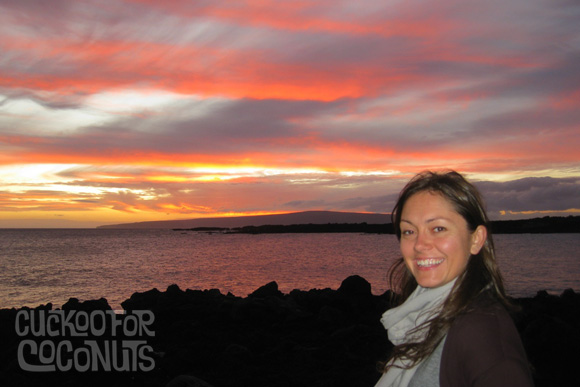 While I had to go back to work, Conn made it out to Launiupoko a few days to snap our guest surfing the waves. Here she is hangin' out, waiting... and her patience paid off. She caught a few good rides! 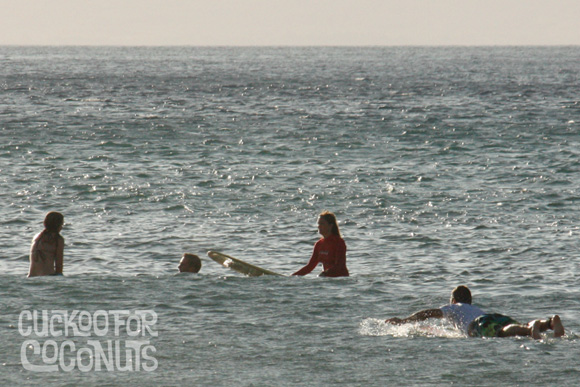 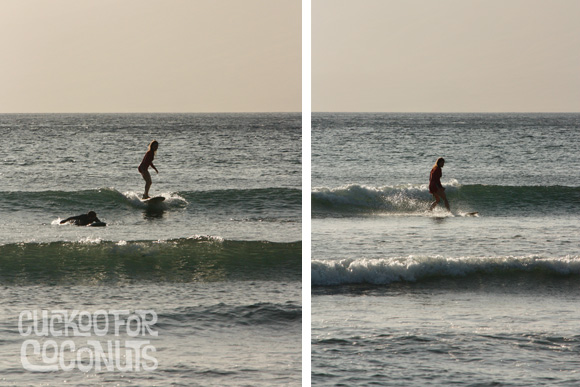